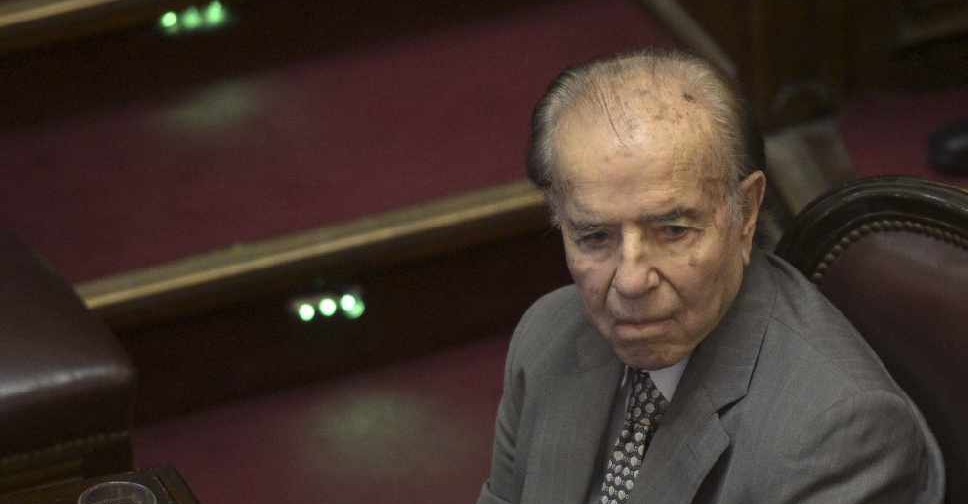 Argentina's former President Carlos Menem has died at the age of 90 after battling long-term health problems.

Menem led a tabloid personal life while he pushed Argentina to an economic boom, but his two-term 1989-1999 presidency crumbled under the weight of corruption scandals and he spent years plotting an unlikely comeback.

At his peak, Menem entertained the Rolling Stones at his residence and put Argentina on the international stage, sending troops to the Gulf War and Bosnia.

He won re-election after he privatised creaky state enterprises in a massive transformation of Argentine institutions in the early 1990s and the economy flourished.

But he left office under a cloud -- charged with corruption and illegal arms deals in 1991 and 1995 with Croatia and Ecuador.

Ten years later, he was cleared of the arms smuggling charges, but Menem could never shake off the widely held suspicion that he had been involved in shady dealings even if he was never convicted.

The lawyer son of Syrian immigrants in La Rioja province, 1,200 km west of Buenos Aires, Menem became active in the Peronist party in the 1950s and 1960s and visited party founder Juan Peron in exile in Spain in 1964.

After a 1976 military coup Menem was arrested and imprisoned for five years, a time he dedicated to planning his bid for the presidency.

After his release he was re-elected governor two more times.

A charismatic speaker who favoured stylish silk and linen suits, Menem saw himself as the successor of his political mentor, Peron, who died in 1974 after returning from exile.

While some Peronist leaders were trying to take the divided party down a sedate middle road, Menem revived the political boss, or caudillo, origins of the party, courting union leaders and rallying extreme factions from the left and the right to win the party's primaries in 1988.

His policies were praised while the economy grew robustly in the early 1990s, but he was later blamed for high unemployment, corruption and overspending that ate away the benefits his market-economy politics may have brought.