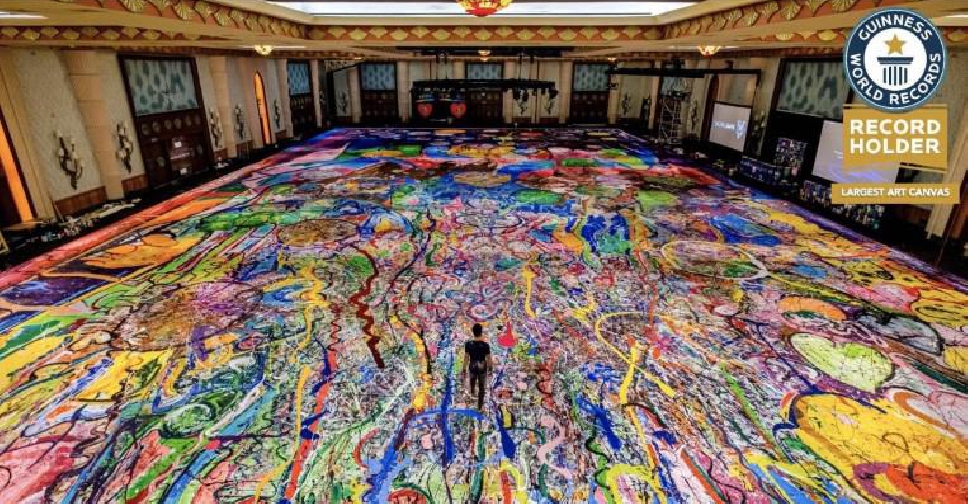 In yet another Guinness World Record set in Dubai, a renowned British artist and philanthropist has won the title of ‘The Largest Art Canvas’ in the world.

It was launched under the patronage of Sheikh Nahyan bin Mubarak Al Nahyan, Minister of Tolerance and Coexistence, in partnership with Dubai Cares, part of the Mohammed bin Rashid Al Maktoum Global Initiatives, and Atlantis, The Palm.

The initiative, which is one of the world’s largest social, artistic and philanthropic projects, aims to raise more than AED110 million to support children and youth around the world affected by the pandemic.

The newly-set record adds to the many Guinness World Record titles set in Dubai.

The record reflects the emirate’s rising status as a global cultural hub and its ability to provide an ecosystem for art and artists to flourish.

Created inside the ballroom of Atlantis, The Palm, which was converted into an art studio, the giant canvas took 28 weeks to create starting from March to September 2020.

Spending almost 20 hours a day on the art piece, Sacha used 1,065 paint brushes and a whopping 6,300 litres of paint in order to complete the extraordinary painting.

The monumental painting was later broken down into numbered, signed, catalogued and framed canvases.

A total of 70 individually framed pieces of the art piece will be sold in four auctions in 2021.

The funds raised will be donated for charitable initiatives in education, digital connectivity, healthcare and sanitation in partnership with Dubai Cares, UNICEF, UNESCO, Global Gift Foundation, as well as the UAE Ministries of Tolerance and Coexistence, and Education.

The initiative has been endorsed by more than 100 celebrities from across the globe, and the project has seen 2.5 billion online users engage with it worldwide.

Commenting on the initiative, Sacha Jafri said, "This is just the beginning of the ‘Humanity Inspired’ journey. ‘Humanity Inspired’ and ‘The Journey of Humanity’ represent much more than just creative work, it is my initiative for true societal change through the hearts, minds and souls of the children of the world – a springboard for a better future for all Humanity."

"If one person can spend 20 hours a day (with only four hours of sleep) for seven months continuously, creating a painting of over 17,000 square feet, imagine what 7.5 billion people could do together if we stopped discrimination, judgement and agenda. One World, One Soul, One Planet’," the artist added.

Record-breaking painting in #Dubai, the Largest Art Canvas in the World, set to raise $30 million for underprivileged youth. https://t.co/TTNThi8EaS pic.twitter.com/mFwzilcB2l