A gift of chocolate from Queen Victoria, intact after 121 years 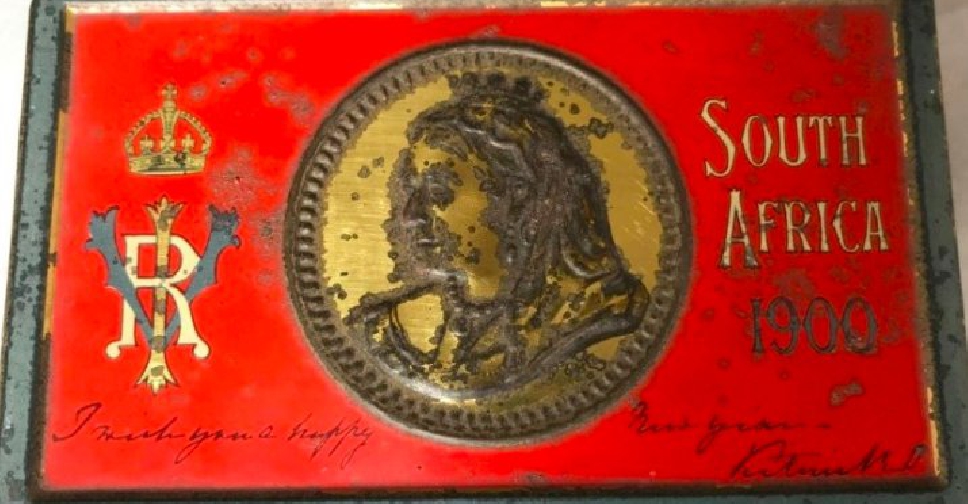 A 121-year-old chocolate bar, from a batch commissioned by Queen Victoria for British troops fighting in South Africa, has been found in its original tin in the attic of an English manor.

The chocolate belonged to an English aristocrat who fought in the Second Boer War, Sir Henry Edward Paston-Bedingfield, and was found in his helmet case at his family's ancestral home, 500-year-old Oxburgh Hall in Norfolk, eastern England.

"Although...you wouldn't want it as your Easter treat, it is still complete and a remarkable find," said Anna Forrest, Cultural Heritage Curator at the National Trust, a heritage charity that manages Oxburgh Hall.

The tin lid has a message in Victoria's handwriting that says "I wish you a happy New Year" and the inscription "South Africa 1900", as well as a portrait of the queen.

The National Trust said it believed Henry had kept the helmet and the chocolate together as mementoes of his participation in the war. The items were discovered among the belongings of his daughter Frances Greathead following her death aged 100 in 2020.

The Second Boer War, from 1899 and 1902, pitted British troops against the forces of two independent South African states run by the Boers, Afrikaans-speaking farmers, where huge gold and diamond deposits had been found.

Victoria commissioned 100,000 226-gramme bars to raise morale among the troops there.

Britain's three main chocolate manufacturers at the time, Cadbury, Fry and Rowntree, were run by Quakers who opposed the war, so they refused to accept payment for the order and packaged the chocolate in unbranded tins.

However, the queen insisted the British soldiers should know that their treats had come from home, and the manufacturers relented and branded some of the chocolates, though not the tins.

While some tins survived, the National Trust said, it is extremely rare to trace one to its original owner, and rarer still to find the chocolate, as most recipients ate theirs.