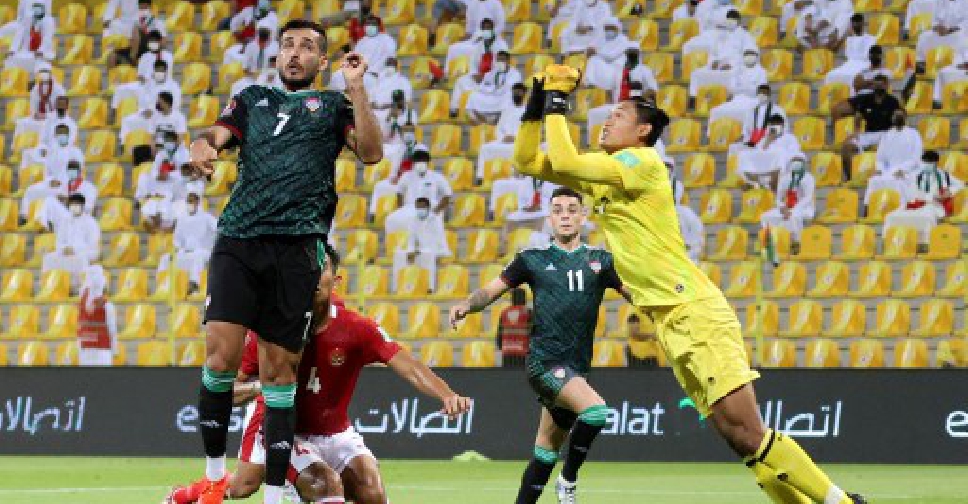 UAE's Ali Mabkhout heads the ball as Indonesia's Muhamed Riyandi jumps to defend during the 2022 FIFA World Cup qualification match between the UAE and Indonesia at Zabeel Stadium in Dubai. Karim SAHIB / AFP

The United Arab Emirates secured an emphatic 5-0 win against Indonesia in Group G of the Asian Qualifiers for the FIFA World Cup Qatar 2022 and AFC Asian Cup China 2023 on Friday.

The result leaves the UAE two points behind leaders Vietnam before their much-awaited face off in their final match on Tuesday, while Indonesia’s campaign ends with a single point.

Indonesia had suffered a 4-0 loss last time out against Vietnam, while the UAE secured their second win in a row with a 3-1 scoreline against Thailand.

The hosts opened the scoring 23 minutes into the match by Mabkhout who hammered in a rebound to make the score 1-0.

Fabio Lima doubled the score five minutes later. Indonesia almost clawed one back, when they won a penalty a few minutes from the break. Indonesia captain Evan Dimas took the shot, but Emirati keeper Ali Khaseif showed expert anticipation and was able to make the save.

Mabkhout added his personal second and his country’s third of the night from the spot three minutes after the break after Adam Alis fouled Mubarak in the area after he dribbled into the six yard box and attempted to shoot.

The fourth goal for the hosts came in the 58th minute by Fabio's precision header that bounced off the ground into the net.

Substitute Sebastian Tagliabue hammered in the fifth goal of the game from short range, leaving the UAE with a seemingly tough task to defeat Vietnam on Tuesday to win Group G.