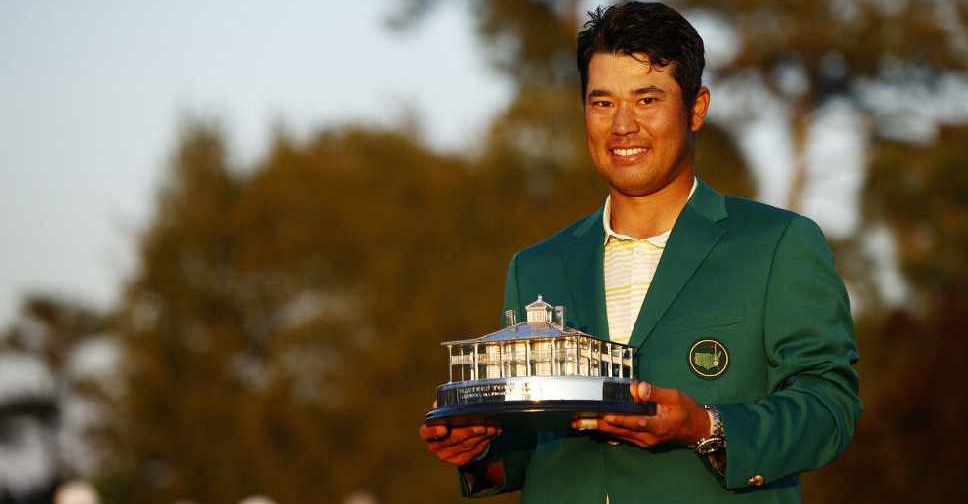 After riding out a four-hour swirl of emotions to finally secure history Sunday, Hideki Matsuyama lifted his cap and gave a slight bow.

With the hopes of a nation atop his broad shoulders, he did just enough to hold on at Augusta, becoming the first player from Japan to win a men's major tournament with a one-shot victory at the Masters.

After heading into the final round with a four-shot lead, the 29-year old picked up his first victory worldwide in four years with a 1-over-par 73 in the final round at Augusta National to finish a steady four days at 10-under 278.

Will Zalatoris, a 24-year old who is not even a full-time member on the PGA Tour, finished in second place at 9 under after shooting a 2 under 70 on Sunday. Xander Schauffele (72), who faltered late, finished in a third-place tie with 2015 champion Jordan Spieth (70) at 7 under.

"Hopefully I will be a pioneer in this and many other Japanese (players) will follow," Matsuyama said through an interpreter on the CBS broadcast as he was about to receive his green jacket inside Butler Cabin from 2020 champion Dustin Johnson. "I'm glad to be able to open the floodgates, hopefully, and many more will be able to follow me."

His own path Sunday was bumpy. Matsuyama saw his large early lead trimmed to one. He pushed it back to a commanding six shots early on the back nine then had to ride out a late charge from Schauffele, while hitting a ball into the water at No. 15, in order to don the most famous blazer in sports.

"My nerves didn't really start on the second nine (holes), it was right from the start today and right to the very last putt," Matsuyama said.

Schauffele moved into contention on the back nine, going from seven shots off the lead to two back entering the par 3 16th hole, but a triple-bogey six, after a tee shot into the water, ended his chances.

"I hit a perfect shot (at 16); I flushed it, which makes it even worse," Schauffele said of an 8 iron that made it to the front of the 16th green but rolled back into the water. "I fought hard. It was a messy start and Hideki was robot-like for 13 holes. I felt like I made a little bit of a run and gave a little bit of excitement to the tournament there at the end."

Matsuyama's lead first was threatened early in his round Sunday when he bogeyed the first hole, while Zalatoris had birdies at Nos. 1 and 2 to pull within a stroke. The advantage went back to three when Matsuyama had a birdie at No. 2 and Zalatoris had a bogey at the third.

Matsuyama had birdies and Nos. 8 and 9, essentially looking unbeatable when he had a par at Nos. 10 and 11. With the pressure mounting from Schauffele on the back nine, Matsuyama had bogeys at Nos. 12, 15 and 16.

When Schauffele's late run ended at 16, the San Diego native bit the steel shaft of his club in frustration.

Suddenly leading by two shots over Zalatoris, Matsuyama had a par at 17, put his drive at 18 in the middle of the fairway and made a bogey from the green-side bunker to grab his first major and his first victory of any kind since the WGC Bridgestone Invitational in August of 2017.

He became the first international player to win the Masters since Spain's Sergio Garcia in 2017.

And while Zalatoris might have finished a shot back he also proved to be a winner over the weekend by showcasing his ball-striking ability and raising his profile exponentially. His final round included five birdies, the last two coming at Nos. 15 and 17.

"I just enjoyed every minute of it," Zalatoris said during a Golf Channel interview after his third ever major was complete. "I've wanted to be in this situation my entire life and I did a real good job of not letting the moment get to me but at the same time really enjoying it.

"I can pick any (poor) shot over the last four days and that was the difference. The fact that I'm frustrated is really motivating and at the same time really exciting."

Spain's Jon Rahm and Australia's Marc Leishman finished in a tie for fifth place at 6 under. Justin Rose, who led after each of the first two rounds, finished alone in seventh place at 5 under.

While Johnson missed the cut Friday, and 2019 winner Tiger Woods did not participate after a serious car crash in February, 2018 champion Patrick Reed (69) finished in a tie for eighth place at 4 under with Canada's Corey Conners (74).