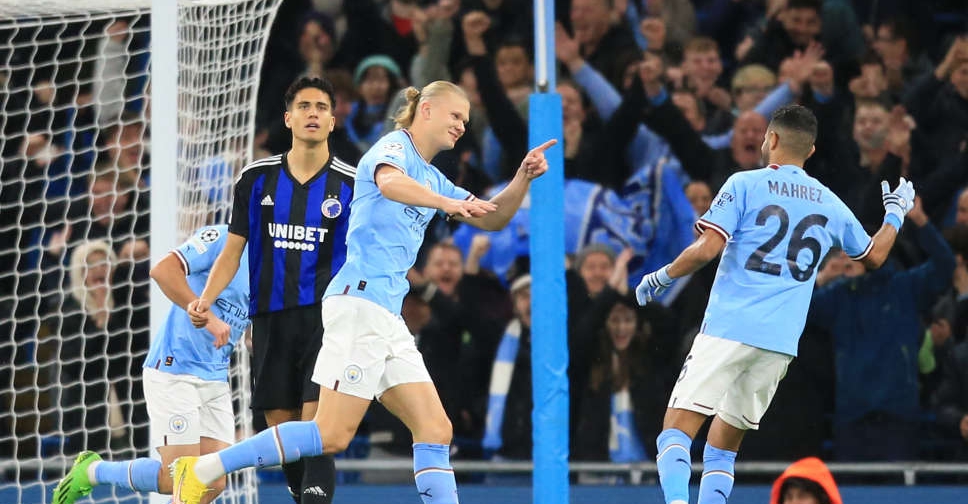 Erling Haaland took his goal tally to an incredible 19 in all competitions this season with another double in Manchester City's 5-0 demolition of FC Copenhagen in Champions League Group G on Wednesday.

Haaland wasted no time in getting City going with yet another strike in his remarkable campaign, sweeping home an early opener, before putting the game beyond the Danish side inside 32 minutes.

City kept coming and added a third six minutes before the break as David Khocholava put through his own net, with Haaland lurking just behind in the hunt for his second treble in four days.

There was to be no hat-trick for Haaland as he was withdrawn at halftime, but the goals kept coming as Riyad Mahrez slotted home a penalty before Julian Alvarez finished things off with a late fifth.

The most comfortable of victories ensured City have taken a maximum nine points in the group and need two more to be sure of a spot in knockout stages. Copenhagen are bottom on one point from three games.

"Erling Haaland just wants to win the game, hat-tricks are not everything," City coach Pep Guardiola told reporters. "We need to have everyone involved. I know the problems we have now -- Kyle Walker is out for a long while -- but we can rely on players off the bench like Rico Lewis, even though he is only 17.

There may have been some sleepless nights among Copenhagen's defenders after Haaland bagged his third hat-trick since joining City in the close season against Manchester United on Sunday.

It took seven minutes on Wednesday for their nightmares to become a reality in the Manchester rain, as Haaland hammered home Joao Cancelo's pull back.