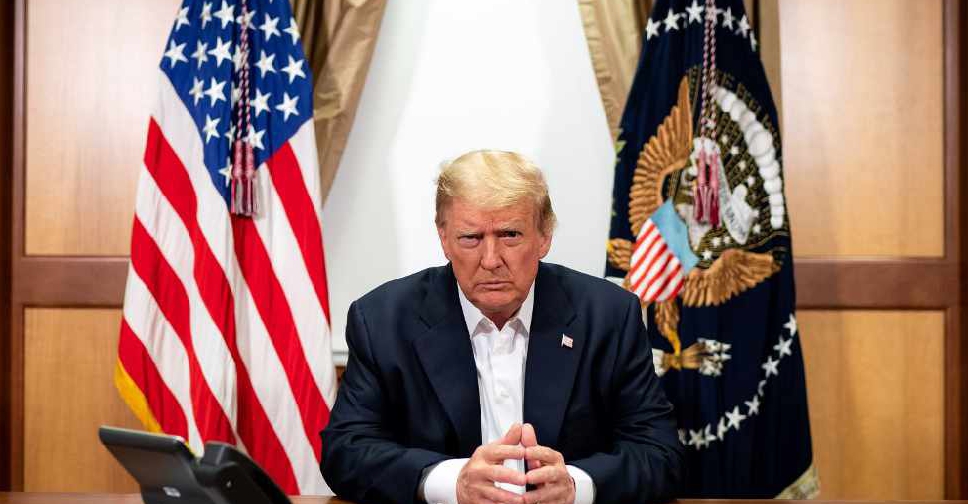 President Donald Trump could be discharged from the hospital where he is being treated for COVID-19 as soon as Monday, according to his doctors.

Sequestered at Walter Reed National Military Medical Center outside Washington since Friday, Trump has released a series of videos in an effort to reassure the public that he is recovering from a pandemic that has infected 7.4 million Americans and killed more than 209,000.

"It's a very interesting journey. I learned a lot about COVID," he said in a video posted to Twitter on Sunday.

A return to the White House might help Trump project a sense of normalcy as he faces a difficult re-election battle against Democrat Joe Biden.

A Reuters/Ipsos poll released on Sunday showed Trump trailing Biden by 10 percentage points. About 65 per cent of Americans said Trump would not have been infected had he taken the virus more seriously.

Trump's doctors have said his health is improving and he could be sent back to the White House as soon as Monday.

Yet they are treating Trump, 74, with a steroid, dexmethasone, that is normally used only in the most severe cases. He is also just two days into a five-day course of an intravenous antiviral drug, remdesivir.

Dr. Sean P. Conley, the White House physician, said on Sunday that Trump's condition had been worse than he had previously admitted. Conley said Trump had run a high fever on Friday morning and he had been given supplemental oxygen after his blood oxygen levels had dropped.

Doctors not involved in Trump's treatment said they suspected his condition might be worse than Conley let on. As an overweight, elderly man, Trump is in a category that is more likely to develop severe complications or die from the disease.

Trump has consistently downplayed the risks of the pandemic since it first emerged this year, and he has repeatedly flouted social-distancing guidelines meant to curb its spread.

At Walter Reed, Trump mounted a brief motorcade to wave to supporters gathered outside the hospital on Sunday. He also said he had been meeting with soldiers and first responders - drawing criticism that he might be exposing more Americans to infection. He was diagnosed with the disease shortly after appearing at a New Jersey fundraiser on Thursday.

Biden, 77, has tested negative for the disease several times since sharing a debate stage with Trump last Tuesday. He is due to resume in-person campaigning on Monday in Florida, where opinion polls show a tight race in a crucial battleground for the November 3 election.

Trump also is pushing to install federal judge Amy Coney Barrett on the Supreme Court, which would lock in a conservative majority on the nation's highest court for years to come.

Several people present at the September 26 White House ceremony where Trump nominated Barrett have tested positive for COVID-19 - including two Republican senators whose votes will be needed to confirm her to the high court.