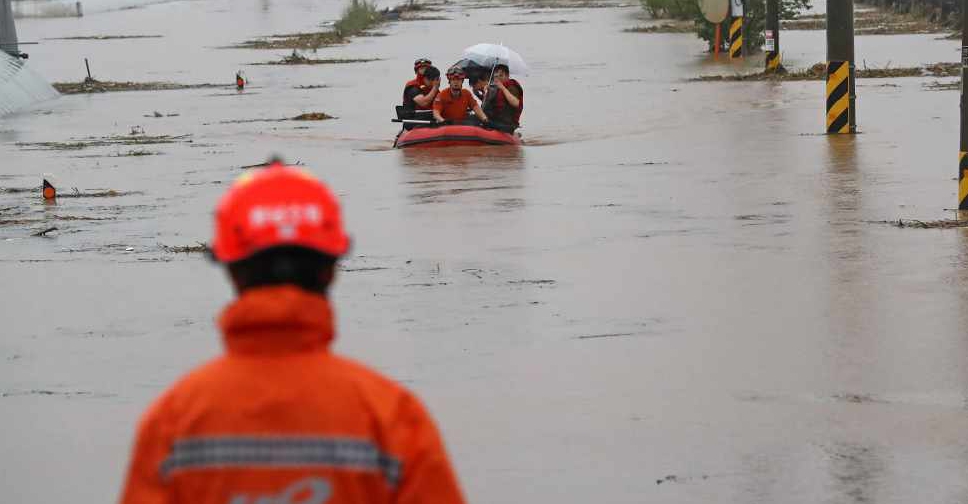 A massive search was underway in South Korea on Thursday for five rescue workers swept over a dam when their boats overturned in surging floodwaters.

In a visit to one of the hardest-hit areas, near the border with North Korea, President Moon Jae-in raised concerns about Pyongyang releasing excess water without notifying the South.

While no specific damage from the release was reported, the leader said the unexpected rush of water had made it more difficult for South Korean authorities to manage already swollen rivers.

Heavy rain has also fallen in North Korea and state media published pictures of flooded streets but did not give any detail of damage or casualties.

Parts of South Korea have seen 44 consecutive days of rain, the longest monsoon since 2013, and continued showers across the Korean peninsula are threatening to bring new floods and landslides.

South Korean Prime Minister Chung Sye-kyun, meanwhile, visited a river near the city of Chuncheon, to the northeast of Seoul, where more than 800 police and fire officials using seven helicopters and 69 boats were searching for the missing rescue workers.

Two rescue boats were trying to free a police boat stuck in wire by a dam near Chuncheon when they overturned, Yonhap news agency reported.

One man was rescued at the scene but seven others were swept over the dam's floodgates.

Elsewhere in South Korea, at least 16 people have been killed and 11 are missing, with more than 1,600 people displaced over recent days.