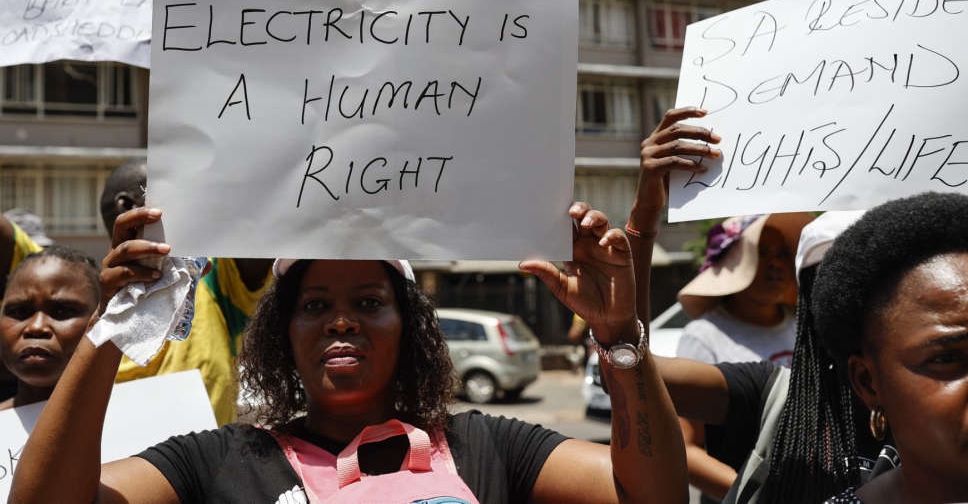 Members of the civil rights movement #NotInMyName hold posters as they march with others in a protest against record blackouts due to troubles at state-owned power utility Eskom. Phill Magakoe / AFP

Calling all South Africans: be sparing with electrical appliances after 4 p.m., think twice about whether you really need to boil so much water for that tea, and don't even think about switching on your air conditioner after dark.

These were among the pleas state power company Eskom's outgoing chief executive made to long-suffering consumers in Africa's most industrialised nation on Sunday, as he reassured them recent maintenance work would ease some of the harshest blackouts in living memory.

Earlier this month households were without electricity for at least six hours a day, sometimes as much as 10 hours, with freezers thawing and businesses forced to crank up diesel generators.

South Africans were braced for worse, with the risk of "stage 8 load shedding" - more than half a day with no power.

"That possibility is receding, which is comforting and positive," De Ruyter told a virtual news conference on Sunday. The current schedule was for lower "stages" of outages that are roughly equal to less than four hours a day.

But he added that there was always an "inherent risk" it could get worse if further outages happen during peak demand.

"We would really urge South Africans to plan (evening) consumption such that ... we have reduced demand," he said. "Switch off air conditioners, only boil water that you need - don't fill the kettle up. These small steps will really make a difference."

Eskom's Chief Operating Officer Jan Oberholzer said that by the end of March the firm should be able to bring 1,862 megawatts back online, and that it would focus on keeping its top six power stations running smoothly.

"We remain acutely aware of how our poor current performance is impacting the country," he said. "We are working tirelessly to address this."