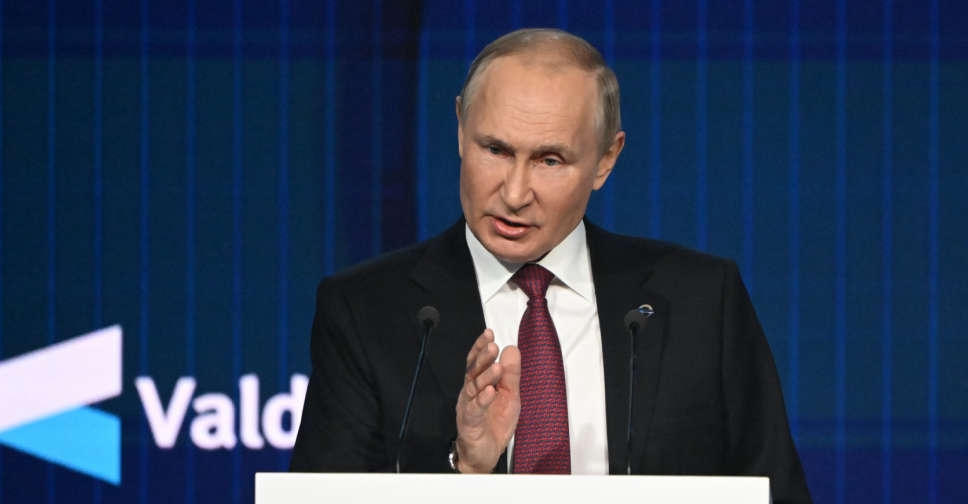 Russian President Vladimir Putin showed no regrets for the war against Ukraine, insisting it was going to plan and play down any nuclear standoff with the West, while both sides prepared for what could be a key battle in Kherson in Ukraine's south.

Putin had a familiar litany of grievances against "Western opponents" as he addressed a conference in Moscow on Thursday, accusing the West of inciting the war and of playing a "dangerous, bloody and dirty" game that was sowing chaos.

The West's dominance over world affairs was coming to an end and "ahead is probably the most dangerous, unpredictable and, at the same time, important decade since the end of World War Two", Putin told the conference.

In recent weeks, Russia has unleashed a wave of missile and drone strikes, hitting Ukraine's energy infrastructure and forcing power cuts in Kyiv and other places, officials said.

The attacks "will not break us", President Volodymyr Zelenskiy said in a video address on Thursday as he stood in the dark beside the wreckage of a downed drone.

"To hear the enemy's anthem on our land is scarier than the enemy's rockets in our sky. We are not afraid of the dark."

Early on Friday, the Ukrainian military provided a summary of battlefield action in Kherson, where Ukrainian and Russian forces have been preparing for weeks for what could be one of the most consequential battles of the war.

Kherson, one of four partially occupied provinces that Russia proclaimed annexed last month, controls both the only land route to the Crimea peninsula that Russia seized in 2014, and the mouth of the Dnipro river that bisects Ukraine.

Ukrainian forces killed 44 Russian servicemen in the past 24 hours, the Ukrainian military said in a Facebook post, adding that its forces had destroyed an ammunition depot and a hangar with equipment.

However, Ukrainian officials have said tough terrain and bad weather had held up their main advance in Kherson.

On Thursday, a close ally of Putin, Chechen leader Ramzan Kadyrov, said 23 of his soldiers had been killed and 58 wounded in a Ukrainian artillery attack this week in Kherson.

After the attack, Chechen forces killed about 70 Ukrainians, he said.

Russian forces shelled Ukrainian positions along the line of contact and built fortifications, particularly on the east bank of the Dnipro, the Ukrainian military said on Thursday.

Russian forces were enduring shortages of material and equipment, including warm clothing, prompting a rise in theft in Russian-occupied areas, it added.

PUTIN: NO CHANGE IN RUSSIAN AIMS

Putin, however, made no mention of Russia's recent battlefield setbacks at the Moscow conference.

When asked if there had been any disappointments in the past year, he answered simply: "No", but added that he always thought about Russian lives lost in Ukraine.

Russia is fighting to protect the people of Donbas, Putin said, referring to an industrial region that comprises Donetsk and Luhansk - provinces in Ukraine's east he proclaimed annexed.

In Luhansk, Russian forces have tried to break through defences in Bilohorivka but were beaten back, regional governor Serhiy Gaidai told Ukrainian television on Thursday.

Fighting has been going on in the Donbas since 2014 between the Ukrainian military and Russian-backed separatists.

Putin also played down a nuclear standoff with the West, insisting Russia had not threatened to use nuclear weapons but had only responded to nuclear "blackmail" from Western leaders.

But U.S. President Joe Biden expressed scepticism, asking in an interview with NewsNation: "If he has no intention, why does he keep talking about it? Why is he talking about the ability to use a tactical nuclear weapon?"

Putin and other officials have repeatedly said that Russia could use nuclear weapons to protect its territorial integrity, remarks interpreted in the West as implicit threats to use them to defend parts of Ukraine that Russia says it has annexed.

Putin also repeated allegations that Ukraine was planning to use a so-called dirty bomb to spread nuclear material, which the United States, Britain and France have called "transparently false". Putin said the Ukrainians would carry out such an attack to blame Russia.

A suggestion by Kyiv that the Russian charge might mean Moscow plans to detonate a "dirty bomb" itself was false, he said. "We don't need to do that. There would be no sense whatsoever in doing that," Putin said.