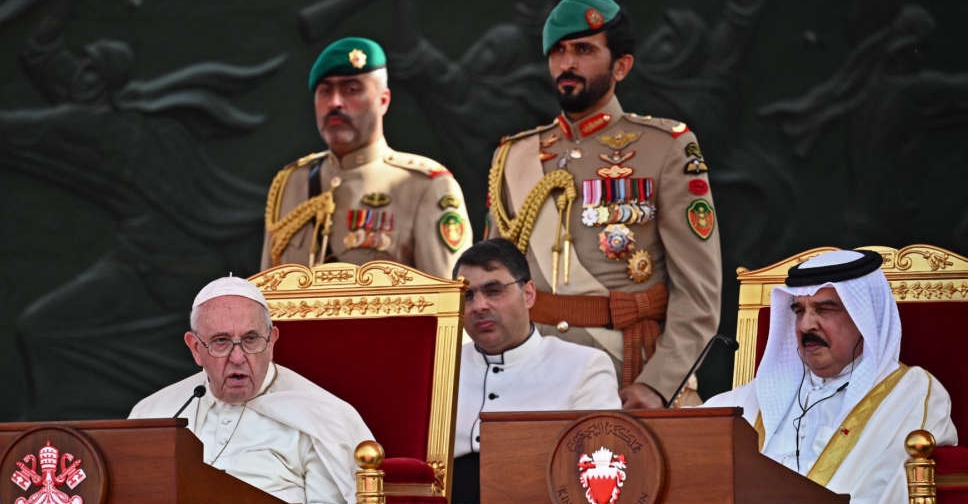 Pope Francis on Friday wove his speech around the role of religions in promoting peace, disarmament and social justice on his first full day in Bahrain.

Francis, who suffers from a knee ailment that forces him to use a wheelchair and cane, closed a forum on East-West dialogue promoted by Bahrain's King Hamad bin Isa Al Khalifa.

He appealed to religious leaders to help bring the world back from "the brink of a delicate precipice" and oppose a new race to rearm that he said was redesigning Cold War-era spheres of influence.

"After two terrible world wars, a cold war that for decades kept the world in suspense, catastrophic conflicts taking place in every part of the globe, and in the midst of accusations, threats and condemnations, we continue to find ourselves on the brink of a delicate precipice and we do not want to fall," he said in a gleaming marble courtyard of the royal palace.

Speaking before the pope, King Hamad bin Isa Al Khalifa called for unanimity in stopping the war between Russia and Ukraine, and a "serious dialogue for the good of all humanity".

The pope echoed the call, as did the third speaker, Sheikh Ahmad al-Tayyeb, Grand Imam of Egypt's Al-Azhar mosque and university, who signed the 2019 "Human Fraternity" document, a landmark manifesto on the role of religions in seeking peace.

Francis, without naming any countries, also condemned the financing of terrorism.

On Friday afternoon, he was due to address Bahrain's Muslim Council of Elders and then preside at a prayer service at the cathedral of Our Lady of Arabia, one of two churches serving Bahrain's Catholic community.

The visit to the Kingdom follows a historic visit to Abu Dhabi in 2019, the first by any pope to the Arabian peninsula.