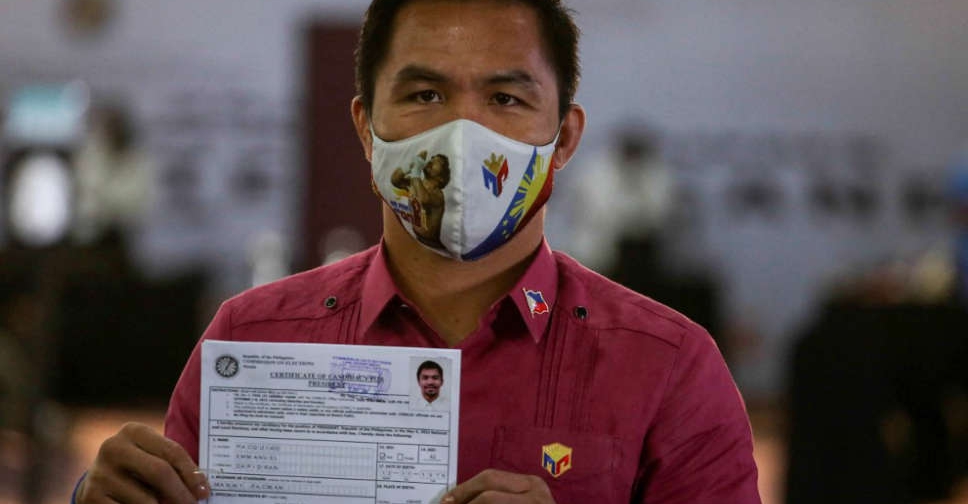 Newly retired boxing icon Manny Pacquiao was the first to file his candidacy to be the next president of the Philippines at the start of registration for thousands of political posts in what is expected to be a hotly contested election in May next year.

The week-long registrations, usually a festive event with big crowds, will be more sober this year with restrictions in place to fight one of Asia's deadliest COVID-19 epidemics.

Pacquiao, who was joined by his wife and running mate, house deputy speaker Lito Atienza, submitted his certificate of candidacy to the poll body without fanfare, before saying a few words to the media about his plans should he get elected.

"My priority is to resolve the pandemic so we can drive the economy to recovery," said Pacquiao, who was wearing a maroon polo shirt and a white face mask with his and the Philippine flag's image.

On his way to the registration building, Pacquiao was greeted by dozens of supporters waiting by the roadside and waving banners that read "Fight, Pacman".

Pacquiao said he was unperturbed by the results of an opinion poll showing him in fourth spot among preferred presidential contenders, saying: "The voices of the poor have not been heard."

One of the greatest boxers of all time and the only man to hold world titles in eight different divisions, Pacquiao retired from boxing in September to run for the presidency. He is a two-term congressman and currently senator.

The registration process should put an end to months of speculation over who will vie to succeed firebrand President Rodrigo Duterte, 76, who under the constitution cannot seek re-election and will contest the vice presidency race instead.

Aside from Pacquiao, two other contenders have declared their intention to run for president. Manila Mayor Francisco "Isko Moreno" Domagoso, a former actor, and Senator Panfilo Lacson, an ex police chief, were expected to file their certificates in the following days.

But the spotlight will be on Sara Duterte-Carpio, the president's daughter, despite her ruling out running for the office next year.

Duterte-Carpio, 43, replaced her father as Davao City mayor when he became president, and she remains by far the most popular presidential prospect, according to successive opinion polls this year.

Analysts say it is crucial her father's successor is a loyalist, to insulate him from potential legal action at home or by the International Criminal Court, over the thousands of state killings in his war on drugs since 2016.

Critics say his interest in the vice presidency is also a self-preservation move. Duterte says his motivation is public service, not power.

Vice president, Leni Robredo, who leads the opposition, is also being urged by supporters to run for the top post.

"In the coming days, please pray with me so that our decision will be what is best for our country," she said.

More than 60 million Filipinos will vote in May 2022 for a new president, vice president, and more than 18,000 lawmakers and local government officials.

Candidates have until October 8 to register, but withdrawals and substitutions are allowed until November 15, leaving scope for last-minute changes of heart, like the 11th hour entry of Duterte for the 2016 election, which he won by a huge margin.