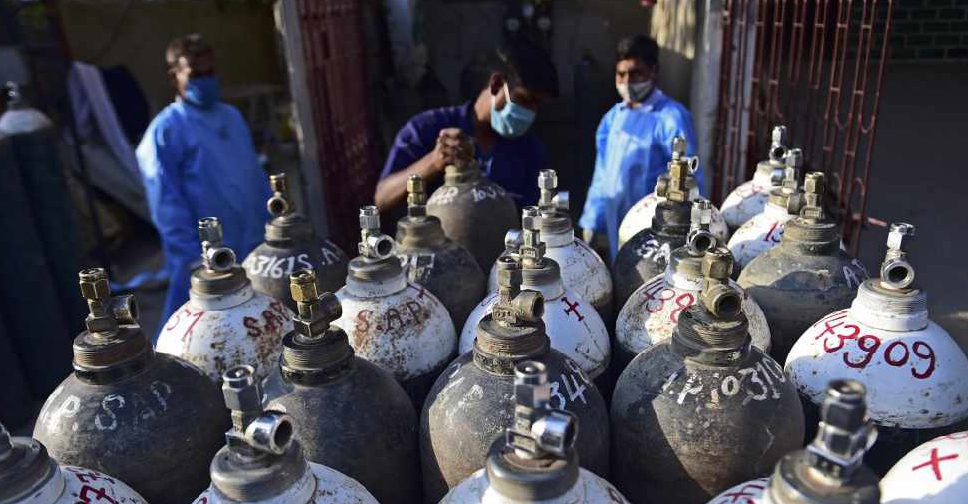 A health worker arranges oxygen cylinders that are being used for COVID-19 patients at a private hospital in the city of Allahabad.

India's capital region of Delhi ordered a six-day lockdown on Monday as daily COVID-19 cases nationwide hit a new record and the health system crumbled under the weight of new infections.

India's hospitals are struggling with a shortage of beds, oxygen and key medicines as infections pass the 15 million mark, second only to the United States.

Fewer than 100 critical care beds were available in the city of New Delhi, with a population of more than 20 million people, Chief Minister Arvind Kejriwal said on Sunday, as social media was flooded with complaints.

Criticism has mounted over how Prime Minister Narendra Modi's administration has handled India's second wave of the pandemic, with religious festivals and election rallies being attended by thousands.

Opposition Congress leader Rahul Gandhi - who has also addressed election rallies in recent weeks - said on Sunday he was suspending all his public rallies in West Bengal, which is in the middle of elections.

As of Monday, India had administered nearly 123.9 million vaccine doses, which is the most in the world after the United States and China, though it ranks much lower in per capita vaccination