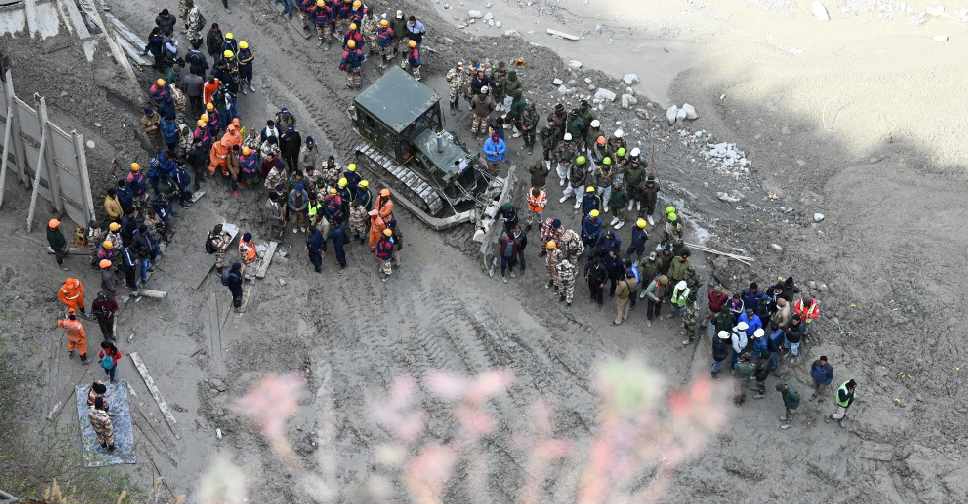 Rescuers raced to free around 35 Indian construction workers trapped in a tunnel, two days after the dam they were helping to build was swept away by a wall of water from a collapsed glacier.

The workers were among 197 people who officials said were still unaccounted for, as the death toll from the disaster - which also broke apart bridges, cut off villages and scarred tracts of mountain landscape - rose to 28.

Packing rocks, dirt and construction debris and thought to have been triggered when a glacier lake fed by India's second highest peak, Nanda Devi, collapsed, the floods swept down the Dhauliganga river on Sunday.

Officials said most of those still missing were shift workers at either the Tapovan Vishnugad hydroelectric project, where the tunnel was situated, or at Rishiganga, a smaller dam which was swept away in the flood.

Soldiers using bulldozers had cleared away rocks at the mouth of the 2.5-km tunnel, and video posted by the Indo-Tibetan border police service showed rescuers checking the water level deeper inside.

Rescuers hoped to open the tunnel up by Tuesday afternoon, said Ashok Kumar, director general of police in Uttarakhand state, where the flash flood occurred.

Thirteen villages cut off by the floodwaters were being resupplied from the air, Home Minister Amit Shah told parliament.

A government official said many locals had apparently managed to escape the waters by fleeing to higher ground as soon as they heard the rumble of the water racing down the valley.

"The workers in the tunnel may not have heard anything and got stuck," the official said.

The 520 MW Tapovan project, being built by state firm NTPC, is one of many run-of-river projects being developed to upgrade Uttarakhand's power network.

Officials have yet to conclusively determine what caused the disaster, though scientists investigating it believe heavy snowfall followed by bright sunshine combined with a rise in temperatures may have triggered the glacier's collapse.

A clearer picture of the circumstances is expected to emerge later this week, officials said.