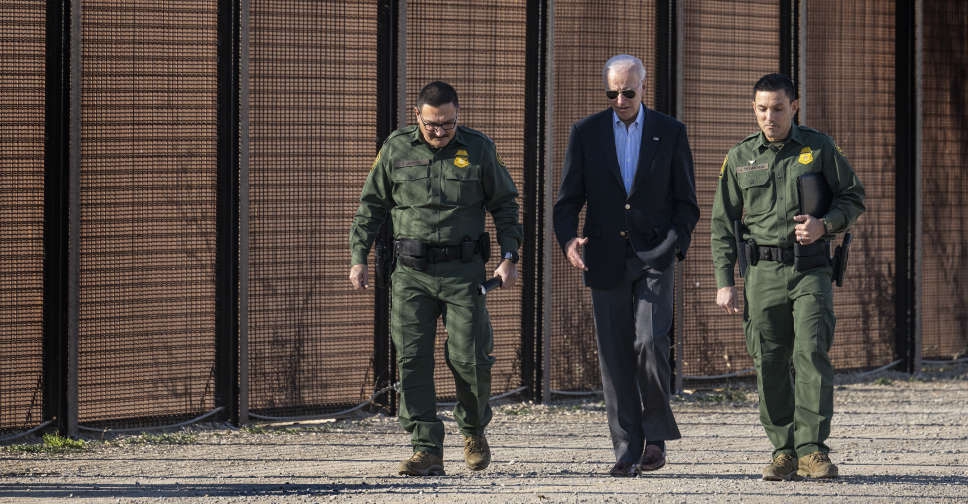 President Joe Biden visited the US-Mexico border on Sunday for the first time since taking office, tackling one of the most politically charged issues in the country as he prepares for a re-election bid.

Accompanied by Border Patrol agents, Biden toured a section of the wall that divides the two countries, a signature priority of his Republican predecessor Donald Trump, in an effort to demonstrate that he was taking the issue seriously.

Biden on Thursday said his administration would tighten immigration enforcement by blocking Cuban, Haitian and Nicaraguan migrants at the border, expanding the nationalities of those who can be expelled back to Mexico.

But that has not impressed Republicans like Texas Governor Greg Abbott, who accused him of failing to enforce immigration laws.

"You have violated your constitutional obligation to defend the States against invasion through faithful execution of federal laws," Abbott, a possible 2024 presidential candidate, wrote in a letter he handed to Biden upon his arrival in the state.

Biden told reporters he had not yet read the letter.

Joined by Secretary of Homeland Security Alejandro Mayorkas, the president also visited the Bridge of the Americas, which connects the United States and Mexico, and viewed equipment that border officials use to detect illegal drugs.

Biden hopes to strengthen relations with Border Patrol agents, some of whom have bristled at the rollback of hardline enforcement policies by the White House.

The long-term goal of Congress reforming America's creaky immigration system is unlikely to succeed given Republicans' newly assumed control of the U.S. House of Representatives.

Biden sent Congress an immigration reform plan on his first day in office two years ago, but it floundered due to opposition from Republicans, who also blocked his request for $3.5 billion to beef up border enforcement.

Republicans are pushing their own plans for the border after securing a narrow majority in the House of Representatives in the 2022 midterm elections.

"They've allowed now a situation where frankly, we no longer have a border," Jordan said.

Mayorkas on Sunday said international crises and legislative gridlock limited Biden's ability to reduce the number of migrants making their way to the United States.

"We're just dealing with a broken system," Mayorkas told reporters aboard Air Force One on the way to Texas.

El Paso's Democratic mayor declared a state of emergency last month, citing hundreds of migrants' sleeping on the streets in cold temperatures and thousands being apprehended every day.

U.S. border officials apprehended a record 2.2 million migrants at the border with Mexico in the 2022 fiscal year that ended in September, though that number includes individuals who tried to cross multiple times.