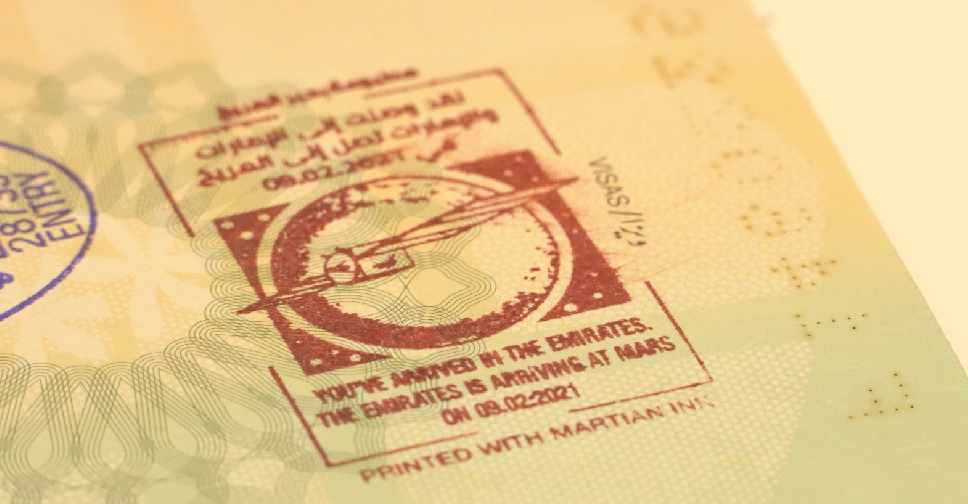 Visitors arriving at UAE airports will receive a Martian Ink stamp on their passports today, in commemoration of the Hope Probe's historic attempt to orbit the red planet.

The stamp with the UAE emblem says “Impossible is Possible,” which is also the country’s ambition and guiding principle.

It offers a memorable reminder of a new era for Arabs in time and space with a special message reading: "You’ve arrived in the Emirates. The Emirates is arriving at Mars on 09.02.2021."

Produced by the UAE Government Media Office in collaboration with Dubai Airports, the special passport stamp marks the Hope Probe's attempts to overcome the most critical phase of its mission to enter the Red Planet’s orbit.

If successful, the Probe will provide the first complete picture of the Martian atmosphere.

The limited-edition design is made from the world’s first ‘Martian Ink,’ extracted from volcanic basalt rocks that give Mars its distinct rusty colour.

The rocks were collected during a special mission to the UAE’s eastern Al Hajar mountains and Sharjah’s Mleiha desert by experts and gemologists.

They were then crushed into a fine paste, dried in the sun, and mixed with adhesives to create three separate colours that represent the Red Planet – ready for stamping into the passports of thousands of visitors.

Basalt rocks, which can only be found in certain parts of the world, date back tens of millions of years and give the UAE’s mountain ranges their distinct rugged look.

Meanwhile, passengers at Dubai Airports can also witness the historic moment through the live-streaming screen placed at concourse B near Gate 26 from 7:00 pm.

If you’re travelling through DXB tonight, stop by the big screen near gates B26 and watch history in the making as the UAE Mars Hope Probe enters the orbit of Mars for the first time. Streaming live from 7pm, in Concourse B near Gate 26 #arabstomars pic.twitter.com/K72oDqpUci