By Natasha Thomas and Sneha May Francis 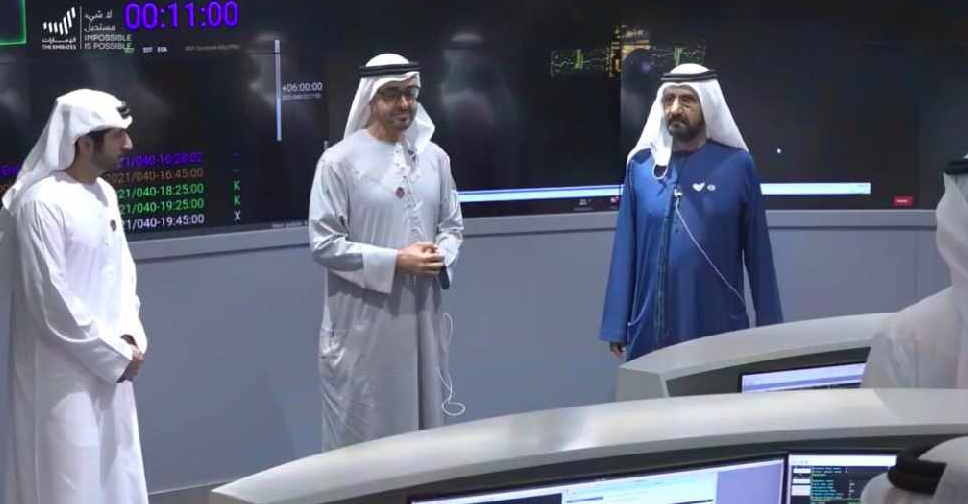 The UAE made history on Tuesday turning its founder Sheikh Zayed’s 50 year old dream into reality.

It sent a signal to the mission control centre based in Dubai's Mohamed Bin Rashid Space Centre confirming this achievement.

It successfully completed one of the toughest moments of this mission which required the spacecraft to work completely autonomously, with no real-time communication.

The moment was celebrated at the control room based in Mohammed Bin Rashid Space Centre in Dubai with the UAE leaders congratulating the young scientists behind the mission.

Hailing the historic breakthrough, UAE President His Highness Sheikh Khalifa bin Zayed Al Nahyan said, "This historic achievement would not have been possible without the persistence and determination to implement the idea that emerged at the end of 2013 by His Highness Sheikh Mohammed bin Rashid Al Maktoum, Vice President and Prime Minister of UAE and Ruler of Dubai, who followed it up closely until its success."

The rulers celebrated the project as a great success for the UAE, the wider Arab region and the global scientific community following six years of technical and logistical efforts to complete the project.

"The Hope Probe’s historic arrival to Mars is the greatest celebration of the 50th anniversary of our country. It sets the beginning of the next 50 years with boundless ambitions and dreams," said Sheikh Mohammed, adding, "Our next accomplishments will be even bigger and greater."

Meanwhile, Sheikh Mohamed said: "the Hope Probe’s successful arrival to Mars is an Arab and Islamic achievement that was made possible by the relentless efforts of our youth. The mission marks our entry in the global race to space."

Now that it has entered the Martian orbit, the Probe will transition to the Science phase– transmitting its first image of Mars back to Earth within just one week.

Over the next two months, the probe will transition to its science orbit, a process excepted to be completed by April 2021.

The probe has a planned 20,000 to 43,000 km elliptical science orbit and it's expected to complete one orbit of the planet every 55 hours.

While the probe will be in daily contact with Earth during the capture orbit phase, in its science orbit, contacts will take place 2 to 3 times a week with each pass being some 6 to 8 hours in order to download data and upload updates and instructions.