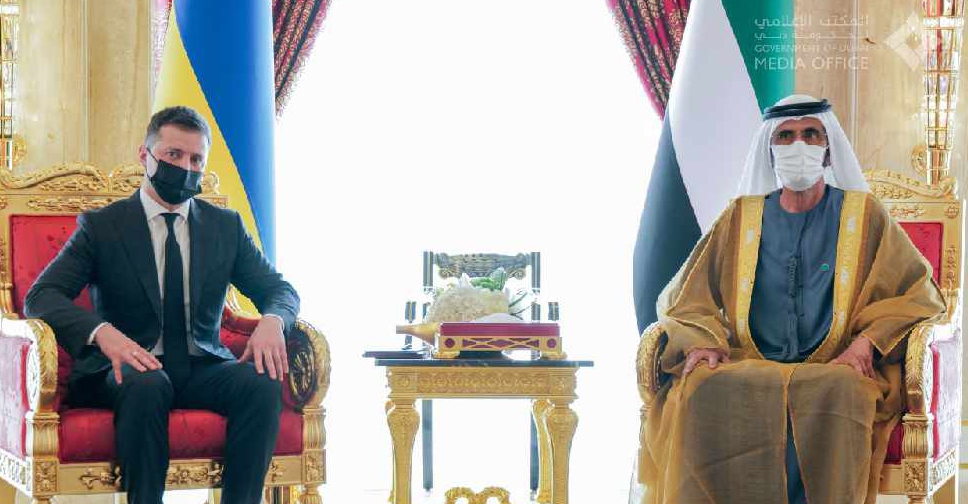 Welcoming Zelensky on his first official visit to the UAE, Sheikh Mohammed expressed hope that it will help strengthen bilateral cooperation and the exchange of expertise between the two countries in tourism, economy, infrastructure, food security, and other areas of mutual interest.

During the meeting, Sheikh Mohammed and President Zelensky discussed the agreements and Memoranda of Understanding signed between the countries.

Sheikh Mohammed stressed the importance of the pacts in advancing bilateral ties and establishing investment partnerships.

Zelensky expressed the keenness of his country’s government to promote mutual tourism, increase Emirati investments in vital economic sectors, and reinforce the cultural, humanitarian, commercial and security relations between the two countries.

He also commended the significant development witnessed by the UAE and the hosting of the Expo 2020 Dubai, which he said will be a promising opportunity to promote Ukraine and its investment potentials.

.@HHShkMohd receives, in the presence of @HamdanMohammed and @MaktoumMohammed, the President of Ukraine at Zabeel Palace. Both discussed bilateral relations between the two countries and the positive impact of their cooperation. pic.twitter.com/Ad0iGJvv0r