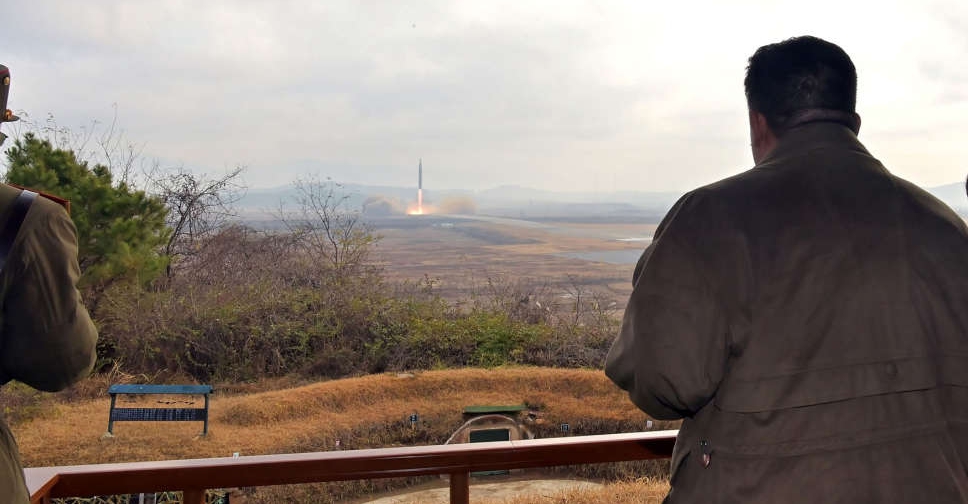 The isolated country tested the Hwasong-17 ICBM on Friday, a day after warning of "fiercer military responses" to Washington beefing up its regional security presence, including nuclear assets.

Attending the site with his daughter for the first time, Kim said threats from the United States and its allies pursuing a hostile policy prompted his country to "substantially accelerate the bolstering of its overwhelming nuclear deterrence."

"Kim Jong Un solemnly declared that if the enemies continue to pose threats ... our party and government will resolutely react to nukes with nuclear weapons and to total confrontation with all-out confrontation," the official KCNA news agency said.

The launch of the Hwasong-17 was part of the North's "top-priority defence-building strategy" aimed at establishing "the most powerful and absolute nuclear deterrence," KCNA said, calling it "the strongest strategic weapon in the world."

The missile flew nearly 1,000 km (621 miles) for about 69 minutes and reached a maximum altitude of 6,041 km, KCNA said. Japanese Defence Minister Yasukazu Hamada said the weapon could travel as far as 15,000 km (9,320 miles), enough to reach the continental United States.

Choe singled out a recent series of their joint military drills and efforts to reinforce American extended deterrence, including its nuclear forces to deter attacks on the two key Asian allies.

Kim said the test confirmed "another reliable and maximum capacity to contain any nuclear threat" at a time when he needed to warn Washington and its allies that military moves against Pyongyang would lead to their "self-destruction."

"Our party and government should clearly demonstrate their strongest will to retaliate the hysteric aggression war drills by the enemies," he said.

"The more the US imperialists make a military bluffing ... while being engrossed in 'strengthened offer of extended deterrence' to their allies and war exercises, the more offensive the DPRK's military counteraction will be."

Kim referred to his country by the initials of its official name, the Democratic People's Republic of Korea.

He ordered swifter development of strategic weapons and more intensive training for the ICBM and tactical nuclear weapons units to ensure they flawlessly perform their duty "in any situation and at any moment," KCNA said.

Unveiled at a military parade in October 2020 and first tested last March, the latest test of the Hwasong-17 demonstrated the capabilities of a weapon potentially able to deliver a nuclear warhead to anywhere in the United States.

Some analysts have speculated it would be designed to carry multiple warheads and decoys to penetrate missile defences better.

The UN Security Council will gather on Monday to discuss North Korea at the request of the United States, which, together with South Korea and Japan, strongly condemned the latest launch.

China and Russia had backed tighter sanctions following Pyongyang's last nuclear test in 2017, but both vetoed a US-led push for more UN penalties over its renewed missile launches in May.

ICBMs are North Korea's longest-range weapon, and Friday's launch is its eighth ICBM test this year, based on a tally from the US State Department.

South Korean and US officials have reported a number of North Korean ICBM failures, including a November 3 launch that appeared to have failed at a high altitude.