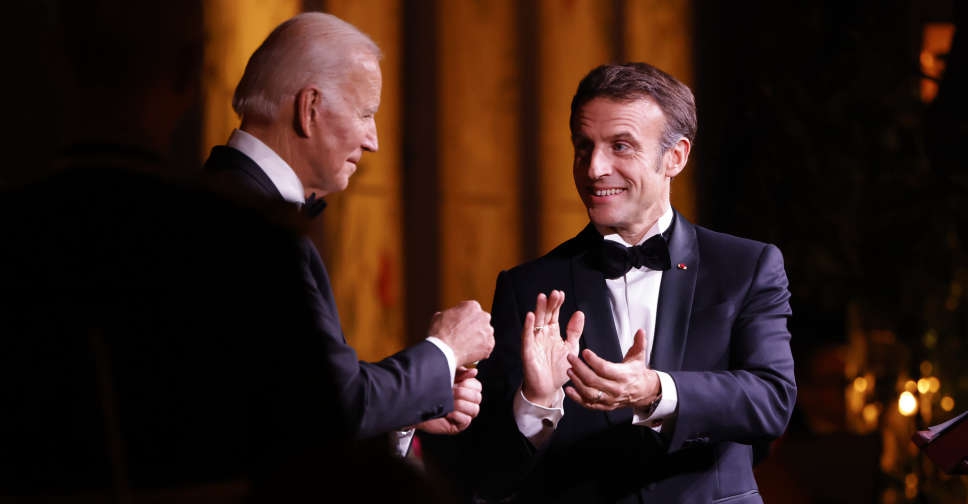 Joe Biden on Thursday used the first state visit of his presidency to demonstrate unity with France's Emmanuel Macron on Ukraine, show willingness to speak to Russia's Vladimir Putin and assuage European anger over U.S. subsidies.

But Ukraine, the biggest attack on a European state since 1945, remained the most pressing issue for the leaders, who vowed to continue robust support and to back Kyiv during the tough winter months.

Biden has so far resisted talking to Putin since the invasion was launched in February, while Macron has kept lines of communication open. Russia calls the war a "special operation."

"Let me choose my words very carefully," Biden told a news conference with Macron. "I'm prepared to speak with Mr. Putin if in fact there is an interest in him deciding he's looking for a way to end the war. He hasn't done that yet."

Macron, for his part, said he would continue to talk to Putin to "try to prevent escalation and to get some very concrete results" such as the safety of nuclear plants.

Biden pledged to Macron to make changes to U.S. legislation passed by the U.S. Congress this year that European nations fear will harm their economies.

Bills aimed at boosting U.S. renewable energy and the semiconductor industry have "glitches" that can be addressed, Biden said.

At a meeting on Wednesday with U.S. lawmakers, Macron said the act was "super aggressive" toward European companies, one participant told Reuters on condition of anonymity.

"France did not come here to ask for some kind of exception for its economy. We came to share how the consequences of this regulation impact us," he said on Thursday.

European leaders say the legislative package signed by Biden in August is unfair to non-American companies and would be a serious blow to their economies as Europe deals with the fallout from Russia's February invasion of Ukraine.

"There are tweaks that we can make that can fundamentally make it easier for European countries to participate and or be on their own," said Biden, adding he and Macron had a long discussion about the topic.

Macron said it was important for the United States and its European allies to "re-synchronize" their approaches.

The leaders made "major progress" on how to alleviate the impact, and Biden could use executive orders to give European allies the same level of exemptions on local content as countries with free-trade deals, a French finance ministry source said.

On Ukraine, the two leaders said in a joint statement they were committed to holding Russia to account "for widely documented atrocities and war crimes, committed both by its regular armed forces and by its proxies." Russia denies committing war crimes.

They also vowed to coordinate on their concerns regarding "China's challenge to the rules-based international order, including respect for human rights and to work together with China on important global issues like climate change."