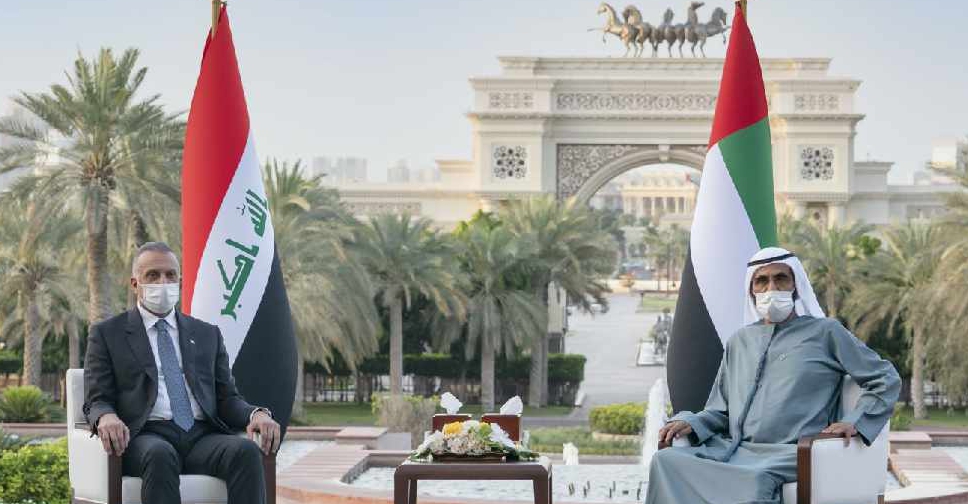 The UAE has announced an investment of $3 billion in Iraq following talks between the Iraqi Prime Minister and the nations' leaders.

The initiative aims to solidify ties, tap fresh prospects of cooperation, and spur developmental and socio-economic growth in Iraq.

Both nations issued a joint statement to mark the announcement at the end of the Iraqi Prime Minister Dr Mustafa Al Kadhimi's official visit to the UAE.

In a post on social media, Sheikh Mohammed said they discussed building stronger ties and relations.

Following their meeting in Abu Dhabi, Sheikh Mohamed posted a message to say that they had exchanged views on Arab, regional and international developments.

The joint statement between the two nations said "In line with the fraternal relations and close historical ties between the UAE and brotherly Republic of Iraq, His Highness Sheikh Mohammed bin Rashid Al Maktoum, Vice President and Prime Minister of the UAE and Ruler of Dubai, and His Highness Sheikh Mohamed bin Zayed Al Nahyan, Crown Prince of Abu Dhabi and Deputy Supreme Commander of the UAE Armed Forces, met with Dr. Mustafa Al Kadhimi, Prime Minister of Iraq, who paid an official visit to the UAE.

The Iraqi premier thanked the UAE under the leadership of President His Highness Sheikh Khalifa bin Zayed Al Nahyan, for its support for Iraq and its people."

It goes on to say "The visit included a series of official meetings on broadening the prospects of cooperation between the two nations.

They also reviewed the latest regional and international developments and underlined the importance of ensuring international cooperation in the face of the COVID-19 pandemic and containing its economic and medical fallout globally.

The Iraqi Prime Minister thanked the UAE for its medical support during the health crisis."

They also agreed on establishing the Iraqi-UAE Business Council and to streamline all the measures in the service of the two nations.

The two sides underscored the importance of strengthening security and defense cooperation and intelligence sharing in the fight against terrorism and agreed on accelerating collaboration in clean energy.

The Iraqi premier thanked the UAE, leadership, government and people, for the warm welcome and hospitality he received during the visit.