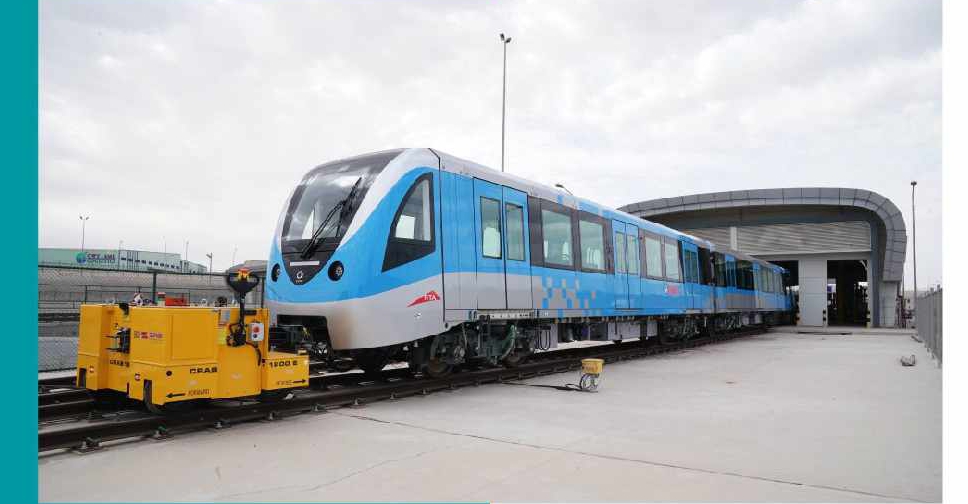 Dubai's Roads and Transport Authority (RTA) has announced the arrival of all the 50 new Dubai Metro trains.

Fifteen of these trains are designated for serving Expo 2020, and the remaining 35 are meant to improve services along the existing routes.

"RTA has introduced extensive improvements to the interior design of the new trains to make them more spacious and comfortable for riders. The last carriage is designated for women and children, and part of the first carriage remained as Gold Cabin. The rest are Silver Cabins," said Mattar Mohammed Al Tayer, Director-General and Chairman of the Board of Executive Directors of the RTA.

"Seats in the new trains are transversal in the Gold Cabin and longitudinal in both the Silver and the Women & Children Cabins. This redistribution of seats enables the increase of each metro train capacity by 8% from 643 riders to 696 riders," added Al Tayer.

Other improvements include new designs for grab handles and lighting, and the use of new digital advertisement displays. Illuminated dynamic line map will be used to indicate the metro route & stations, and the lighting will be using LED power-saving technology.

In addition, the design of the luggage compartment has been revamped to make the space usable by standing commuters.

The new carriages are also configured to suit people of determination and ensure the smooth entry and exit of riders.

"The exterior shape of the new Dubai Metro trains was left unchanged to maintain the design identity of the Dubai Metro and its familiar colours to the public," explained Al Tayer.

Video: The arrival of all the 50 new #DubaiMetro trains. The new trains are deployed at the Dubai Metro Depots at Al Rashidiya and Jebel Ali. #RTA is currently conducting operational tests of trains on Route 2020 of the Dubai Metro Red Line. pic.twitter.com/RlS6uoKP0v

The new trains are deployed at the Dubai Metro Depots at Al Rashidiya and Jebel Ali. RTA is currently conducting operational tests of trains on Route 2020 of the Dubai Metro Red Line.

Tests consist of four phases. Phase 1 is a Static Test, where a motionless metro carriage is placed on the track for carrying out a series of tests including communication systems, automated train control systems, electrical power supply system, air-conditioning, onboard electronic equipment, lighting systems and the full integration and interface between various subsystems and components.

Phase 2 is the Dynamic Tests, which covers a series of onboard tests on a train in motion. Tests on the rolling stock cover electrical motors, brake systems, Operational performance tests during normal and emergency cases, power systems, electromagnetic compatibility, automated train control systems, and communications systems.

Phase 3 relates to Operational Tests to verify the system’s reliability and stability. These tests are key phases of the project and start after the completion of tests and the integration of the entire systems. During this phase, the system will be running continuously in a fashion similar to the regular operation, but without passengers, to achieve the targeted operational performance indicator.

Phase 4 constitutes Operational Trials conducted by the metro operator. It is aimed at verifying the readiness of the operator before the start of the actual operation of the service. It involves about 14 days of operation without riders to test the operation of the metro system under all scenarios including normal, degraded and emergency modes.

HE Mattar Mohammed Al Tayer announced the arrival of all the 50 new #DubaiMetro trains. 15 of these trains are designated for serving Expo 2020, and the remaining 35 trains are meant to improve the level of service of the existing Dubai Metro. https://t.co/6pqh6VIL3f pic.twitter.com/LkUJrMxAYc