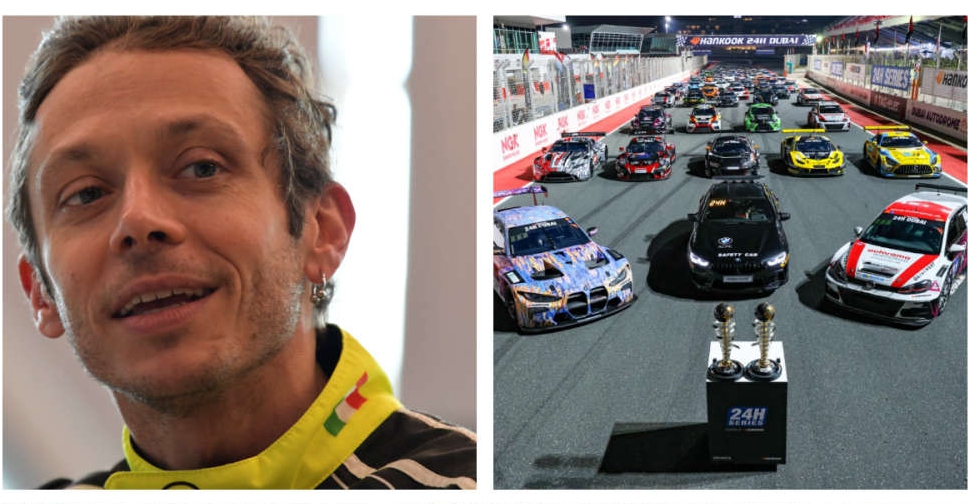 The 18th edition of the prestigious endurance event will be held at Dubai Autodrome, featuring more than 42 teams with 54 cars and 226 different drivers across the GT3, GTX and TCR categories.

The legendary 43-year-old Rossi, who holds the record of 89 premier class victories, will be one of the most recognisable faces on the grid with the Italian set to be behind the wheel for Team WRT – a two-time Hankook 24H Dubai winner.

The Dubai race will be the latest of Rossi’s GT3 career following his MotoGP retirement in 2021 and will be driving alongside Spa 24 Hours winner and 24 Hours of Le Mans class winner Maxime Martin, World Endurance Championship driver Sean Gelael, and Britain’s Tim White, who currently competes in the GT4 European Series.

Speaking of Rossi’s participation, Faisal Al Sahlawi, General Manager of Dubai Autodrome said: “Valentino Rossi is an icon when it comes to Grand Prix motorcycling, having had a truly remarkable racing career that has spanned more than 25 years and we are thrilled to be welcoming him to Dubai Autodrome for the Hankook 24 Hour Dubai race.

“For racing fans – regardless of which discipline you enjoy – this is unmissable opportunity to see one of the sport’s greatest names in action right here in Dubai as he tests himself in one of the most challenging endurance races in the world. The fact that he is taking part reaffirms how highly-rated the Hankook 24H Dubai is which continues to go from strength to strength.”

#Dubai will host some of the world's top endurance car racing champions at the "Hankook 24H DUBAI 2022," a high-speed event taking place at the @Dubai_Autodrome in Motor City from January 13th to 15th, 2022. pic.twitter.com/f1gmPYfSO9

Besides some of the top international drivers that will be taking part, there will also be a mix of Emirati and regional drivers on the track.

The UAE’s Khaled Al Qubaisi will be part of Haupt Racing Team, which will be aiming to emulate its class win and overall podium from the 2021 edition.

There will also be three UAE-based teams – Rabdan Motorsport (922), Dragon Racing (GT4) and Saalocin Racing (GT3/Pro-Am) competing at the weekend. Rabdan Motorsport, led by Saif Al Ameri, will be represented by an all-Emirati drivers line-up following their participation last year.

Aiming to rise the flag high for Oman is Al Faisal Al Zubair for Al Manar by HRT whose team includes Axcil Jefferies, who won in 2022 with Team MS7 by WRT and also instructs drivers at Dubai Autodrome when he’s not participating.