Ten-man Barcelona fight back to win 2-1 at Osasuna 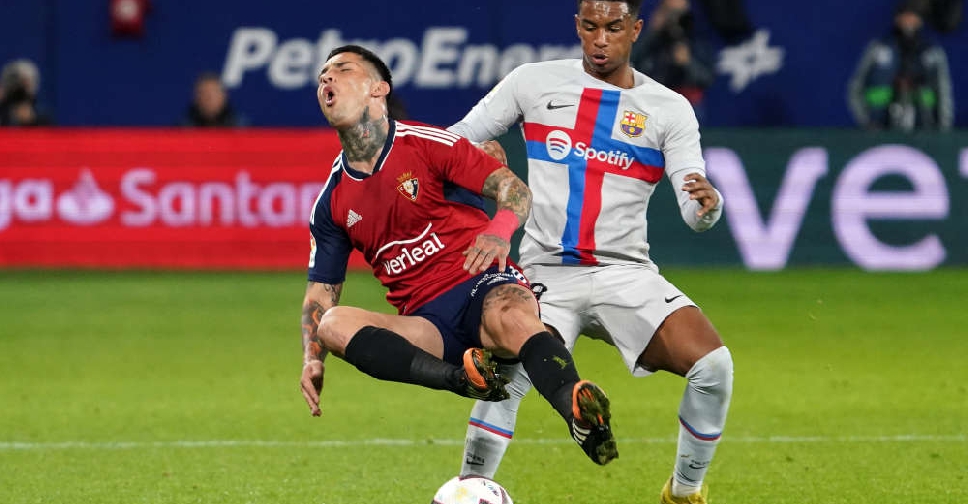 Second-half goals from Pedri and Raphinha rescued 10-man Barcelona as they fought back to win 2-1 at Osasuna in LaLiga on Tuesday after striker Robert Lewandowski was sent off in the first half.

Pedri equalised from a rebound three minutes after the break and Raphinha came off the bench to score Barca's winner five minutes from fulltime, with a brilliant dipping header from outside the box that looped over the goalkeeper into the net.

The win ensured Barca will go into the World Cup break top of the standings on 37 points and it was a feisty affair with Gerard Pique, who was on the bench, also shown a red card at halftime after complaining to the referee in what was the last game of his career.

The encounter started badly for the visitors and swiftly got worse.

First David Garcia headed Osasuna into the lead from a corner in the sixth minute before Lewandowski saw red following a second booking in the 31st.

He was shown a yellow card for dragging back Nacho Vidal in the 11th minute and 20 minutes later he received his marching orders after charging with his forearm in the face Garcia.

It was only the second red card of Lewandowski's career, almost 10 years after he was sent off in the Bundesliga for Borussia Dortmund against Hamburg in February 2013.

It was an ill-tempered game, with both teams given four bookings each and Barcelona manager Xavi Hernandez also receiving a yellow card following several outbursts at the referee.

Pique's red card brought down the curtain on a glittering career after he announced he would retire from soccer when LaLiga breaks for the World Cup this week.

"I'm proud of my team because they fought bravely against a though opponent and questionable decisions by the official," coach Xavi told Movistar Plus.

"I think the referee was too rigorous with Lewandowski. I wish the referees would speak about their decisions and explain themselves."

Barcelona took control of the match and Ferran Torres had a goal ruled out just before halftime for offside, before Pedri's equaliser and Raphinha settled the contest in style.

Osasuna are sixth on 23 points.