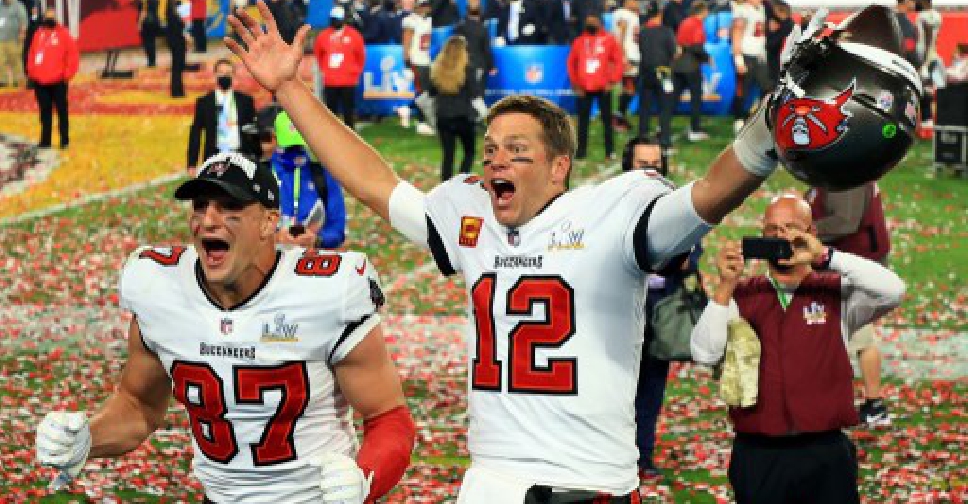 Brady wasted no time putting the Bucs in position for their second Super Bowl title and first since the 2002 season by firing for three first-half touchdowns and a 21-6 halftime lead.

The early onslaught included a patented drive inside the final minute he capped with a 1-yard strike to Antonio Brown with 6 seconds left. Rob Gronkowski grabbed two touchdowns, padding the postseason record for scoring connections from Brady to 14. Gronkowski had six grabs for 67 yards.

A 27-yard TD run in the third quarter by Leonard Fournette, who recorded 89 yards on 16 touches, made it 28-9. That TD helped ice the outcome as the Bucs constantly pressured the Chiefs' Patrick Mahomes, who suffered his worst NFL defeat.

Mahomes finished just 26 of 49 for 270 yards. He had two interceptions, a pick by Antoine Winfield that led to a third-quarter Tampa Bay field goal and the second with a minute remaining by Devin White.

The 43-year-old Brady, who won six Super Bowl championships with New England, added to his age-defying legacy by engineering Tampa Bay to a title in his first season quarterbacking an NFC team. He received his fifth Super Bowl MVP award, adding to his own record.

Playing behind a patchwork line missing two starting tackles, Mahomes was hobbled by a lingering turf toe he injured in the divisional round. He scrambled for 33 yards. Travis Kelce led the Chiefs with 10 receptions for 133 yards. The Chiefs committed 11 penalties, eight in the first half.

Making his 10th Super Bowl appearance, Brady engineered a touchdown in the first quarter of the game for the first time by tossing an 8-yard score to Rob Gronkowski.

Brady, who went 16-for-20 for 140 first-half yards, added a 17-yard touchdown pass to Gronkowski after an offsides penalty against the Chiefs prompted Tampa Bay to take a field goal off the board.

Taking over with just 55 seconds left, he directed a 71-yard march aided by two pass interference calls against Kansas City. The second came in the end zone, allowing the Bucs a chance from the 1-yard line, which Brady cashed by finding Antonio Brown with 6 seconds remaining.

Mahomes started 3-for-12 before finishing 9 of 19 for just 67 yards passing in the half.