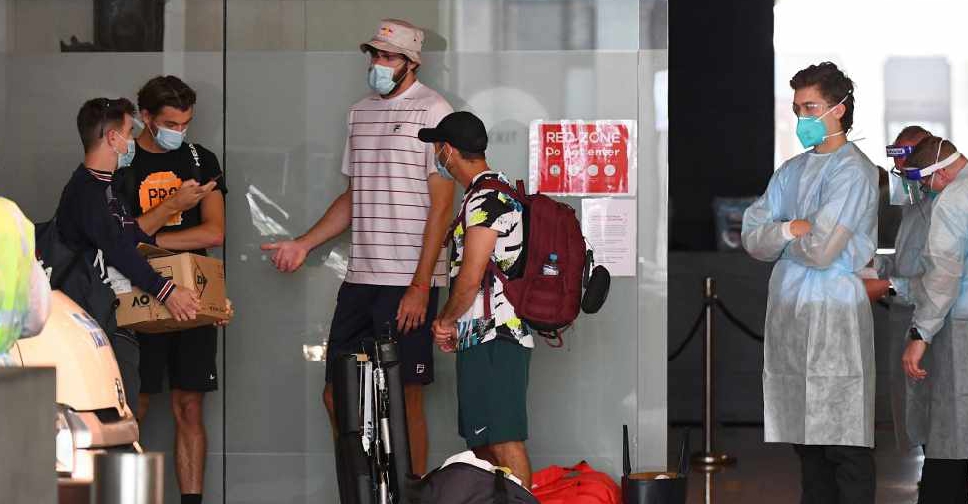 One case of COVID-19 among those in quarantine ahead of the Australian Open has been reclassified, leaving nine active cases in the group of players and staff isolating in Melbourne hotels.

Health officials previously said they were investigating some positive tests for evidence of "viral shedding", where people who have had the virus continue to shed non-infectious remnants after they have recovered.

COVID-19 Quarantine Victoria also said in a statement that the one case of the virus acquired overseas reported on Sunday was not connected to the tennis Grand Slam.

Most of the 970 people in the Australian Open quarantine hotels have entered their second week of the 14-day isolation period with the first arrivals due to be freed from lockdown on Friday.

While most have been allowed out to train for five hours a day, 72 have been confined to their rooms after the positive cases on the charter flights that brought them to Australia.

Four players were among the cases initially reported as being associated with the tennis but only Spain's Paula Badosa has confirmed that she tested positive.

There was bad news for another player in quarantine early on Sunday when the International Tennis Federation denied Ukraine's Dayana Yastremska's application to have her provisional suspension for a doping violation set aside.

The organisers announced on Sunday a new women's competition from February 3-7 to aid the preparations of players in hard lockdown.

"These changes to the lead-in events have been made to give the 72 players a little bit of extra time to help them prepare," tournament director Craig Tiley said in a statement.

"We also will prioritise them for things like practice sessions, gym and ice baths."

"This revised schedule comprised of three WTA 500 events... will allow for our athletes coming out of the respected quarantine period to properly focus on their preparation in a return to competition," Simon said.

Three of the nine cases of COVID-19 linked to the Australian Open were on Saturday revealed to be for the more transmissible coronavirus variant first detected in the United Kingdom.

According to local media, that news scuppered plans to allow the players to associate in groups of up to four, rather than the current two.

The state of Victoria, which contains Australia's second-largest city, endured one of the world's strictest and longest lockdowns last year.

On Sunday the state recorded an 18th straight day with no local transmissions, while Australia as a whole has not reported a case in the community for nine of the last 10 days.