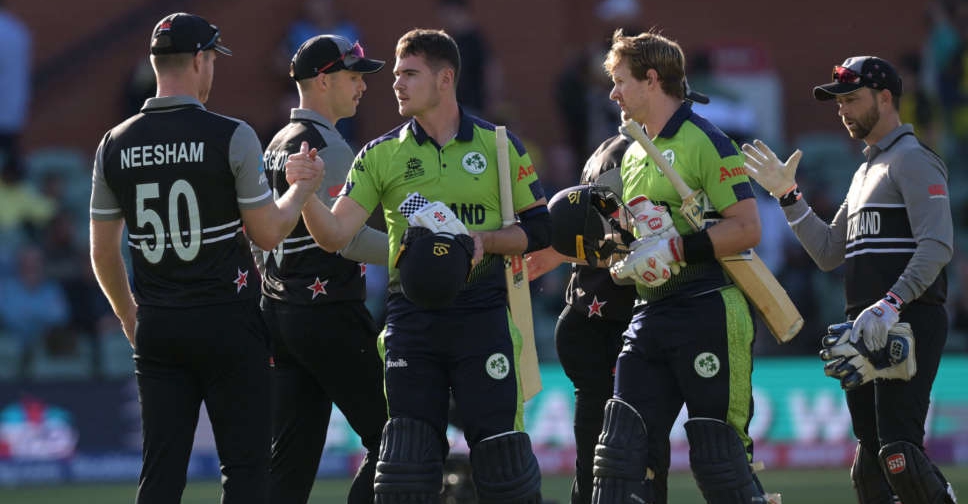 New Zealand became the first team to reach the Twenty20 World Cup semi-finals with a victory over Ireland on Friday.

Meanwhile, Australia face a wait to see if they will be staying in the tournament despite a nervy win over Afghanistan

A Kane Williamson half-century and a spin-bowling assault fired the Black Caps to a 35-run victory at the Adelaide Oval which sealed one of the top two spots in Group 1 and a place in the last four.

Glenn Maxwell scored an unbeaten half century and spinner Adam Zampa took a crucial 2-22 as defending champions Australia later joined New Zealand on seven points after a win by just four runs over the Afghans at the same venue.

It was not, however, enough to raise their net run rate above that of England, who now need only to beat Sri Lanka in their final Super 12 match in Sydney on Saturday to take the other semi-final berth from the group.

"Afghanistan played really well but luckily we managed to hold them back," said Maxwell.

"We've put ourselves in this situation but hopefully the Sri Lankans can do the job for us."

At one stage in Afghanistan's response to Australia's 168-8, it looked like the home side might not even get the win they needed to keep their tournament alive.

Three wickets in Zampa's fourth over -- the first a runout from a Maxwell direct hit -- broke a 59-run stand between Gulbadin Naib (39) and Ibrahim Zadran (26) and took the Afghans from a comfortable 99-2 to 99-5.

Rashid Khan revived the innings with four sixes in a battling 48 to keep his team in the chase but he came up just short in the final over and Afghanistan finished on 164-7 to remain winless in the tournament.

Australia had earlier come out to bat with plenty of intent, a much changed team and a stand-in captain in Matt Wade after Aaron Finch and Tim David were ruled out by hamstring strains.

Cameron Green and Steve Smith came into the side but neither stayed long at the crease and it was left to David Warner (25), Mitchell Marsh (45) and Maxwell (54) to try and get the big runs Australia needed.

Earlier, New Zealand's batsmen posted an imposing 185 for six after Ireland elected to field before the Black Caps' bowlers restricted the Irish to 150 for nine.

Ireland bow out of the World Cup but head home with pride after a solid tournament capped by a sparkling hat-trick from paceman Josh Little.

Left-armer Little had captain Williamson caught for 61, then trapped both James Neesham and Mitchell Santner lbw for no score in the 19th over to bring up Ireland's second hat-trick in T20 internationals.

However, the damage had already been done by Williamson and middle order batsman Daryl Mitchell (31 not out).

Paul Stirling and Andy Balbirnie gave Ireland a fighting chance but left-arm spinner Santner broke the 68-run partnership when he had Balbirnie chopping onto his stumps.