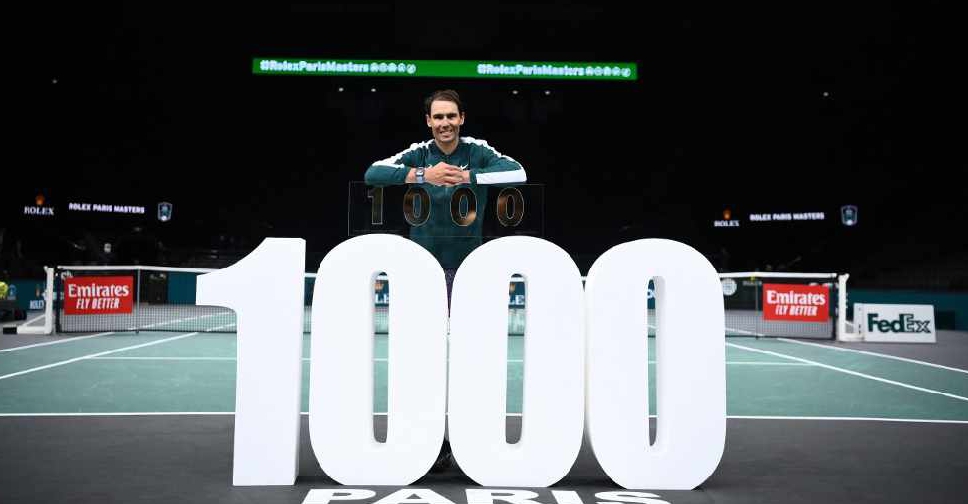 Top seed Rafael Nadal was handed an opening night fright by Feliciano Lopez at the Paris Masters on Wednesday, but rallied to beat his fellow Spaniard 4-6 7-6(5) 6-4 and claim his 1,000th ATP Tour win.

"One negative thing about 1,000 wins is you are very old because to win 1,000 matches you need to have a very long career, but I am super happy," Nadal said in courtside. "It means I've done a lot of things right.

"I'm proud of a lot of things, but I faced some challenges in my career in terms of injuries... It's a big achievement to be playing at the age of 34."

Nadal, who was handed a bye in the first round, got off to a terrible start, losing his opening service game and never really coming to terms with Lopez's blistering serve.

Lopez, 39, won a scarcely believable 93 per cent of his first-serve points and also sent down eight aces as he wrapped up the opening set in style.

"It was a very tough match, and I started the worst way possible with the break against him because you are under a lot of pressure for the whole match," Nadal added.

With both players evenly matched, the second set stayed on serve before Nadal edged a tiebreak to send the contest to a decider.

Nadal broke Lopez in his first service game of the third set and then showed his usual levels of laser-like focus to close out the match.

Next up for the 20-times Grand Slam champion is a meeting with Australia's Jordan Thompson in the last 16.

Elsewhere, fourth seed Alexander Zverev beat Serbia's Miomir Kecmanovic 6-2 6-2 to set up a meeting with France's Adrian Mannarino for a place in the quarter-finals.