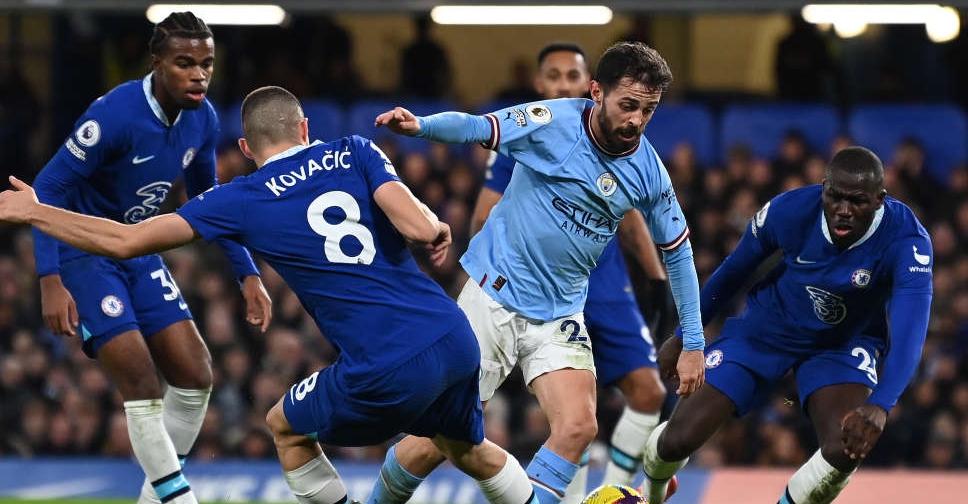 Second-half substitute Riyad Mahrez earned Manchester City a 1-0 win at Chelsea on Thursday to move Pep Guardiola's 2022 champions to within five points of leaders Arsenal in the Premier League.

Mahrez got on the end of a perfectly placed cross from fellow sub Jack Grealish in the 63rd minute after City upped the tempo following a lacklustre first half from the visitors.

Guardiola's halftime talk and substitutes proved the difference, because City were often outplayed in the first half despite Chelsea's injury woes.

The Spanish coach looked delighted and relieved when the final whistle went and said the team had been sloppy and slow in first half.

"In the second half we were miles, miles better in every department. It's a big result for us," he told Sky Sports.

Graham Potter's side were already missing England full backs Ben Chilwell and Reece James as well as midfielder N'Golo Kante. Then Chelsea's ever-present England midfielder Mason Mount failed to make the squad after an injury in training earlier this week.

While City move closer to Arsenal Chelsea are stranded in unaccustomed 10th place after some poor performances under Potter.

Potter might be encouraged by his young substituteswho fought hard against a powerful City side and had some bright moments with 19-year-old Carney Chukwuemeka hitting the post in the first half. But they could not get past an experienced defence, ably marshalled by John Stones.

“It’s a big three points for us," Stones said adding the side regretted dropping points in a draw against Everton in their last game. "How we especially played in the second half was brilliant."

Manchester City, who knocked Chelsea out of the League Cup late last year, host Chelsea next Sunday in the FA Cup.