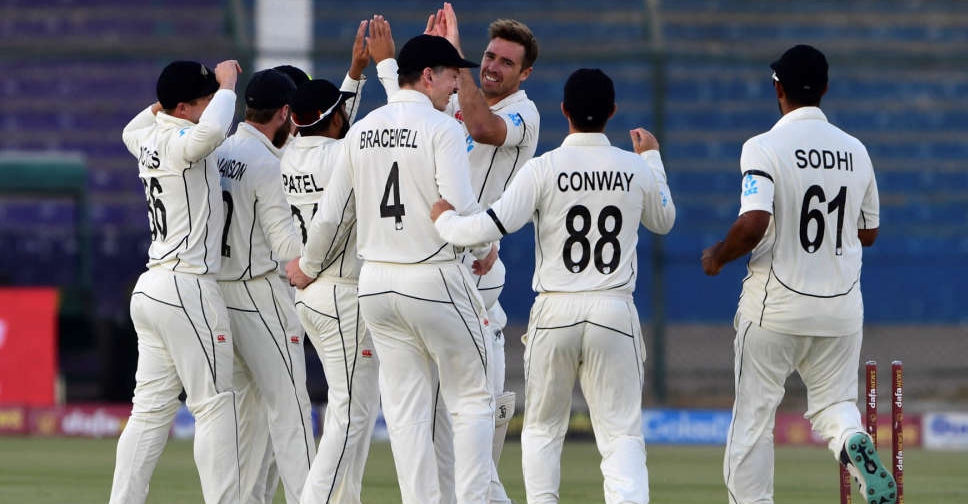 New Zealand set Pakistan a tricky target of 319 and then landed two late blows to boost their hopes of a series-clinching victory in the second test on Thursday.

In his first series as test captain, Tim Southee declared New Zealand's second innings on 277-5 with three overs left on the penultimate day of the contest at the National Stadium.

Pakistan could not open their account in those overs but lost opener Abdullah Shafique and nightwatchman Mir Hamza in dying light to find themselves in a hole.

Southee breached Abdullah Shafique's defence with a ball that kept low and Ish Sodhi bowled Hamza with a sharply turning delivery, with both indicating how the pitch might behave on Friday.

Earlier, Sodhi claimed the final Pakistan wicket as the home side were all out for 408 in their first innings, conceding a lead of 41.

When New Zealand came out to bat for the second time in the match, Tom Latham (62) and Tom Blundell (74) smashed their second fifties of the contest and Michael Bracewell made 74 not out to stretch their overall lead past 300.

Three wickets fell and several umpiring decisions had to be reversed in the eventful second session with Pakistan spinner Abrar Ahmed in the thick of things.

Pakistan blew two reviews inside 12 overs, trying to get Kane Williamson (41) lbw by Abrar on both occasions, and more agony was in store for the bespectacled spinner.

Abrar's celebration was cut short when Latham, then on 36, got an lbw decision against him reversed.

Pakistan, wary of wasting their remaining review, then did not challenge a not-out decision after Abrar had trapped Latham plumb in front, as replays would later confirm.

Abrar eventually had a hand in Latham's dismissal as he took a stunning one-handed catch at mid-wicket.

Abrar also watched helplessly when he induced an edge from Blundell which Sarfaraz Khan spilled behind the stumps.

The opening test between the sides had ended in a draw.