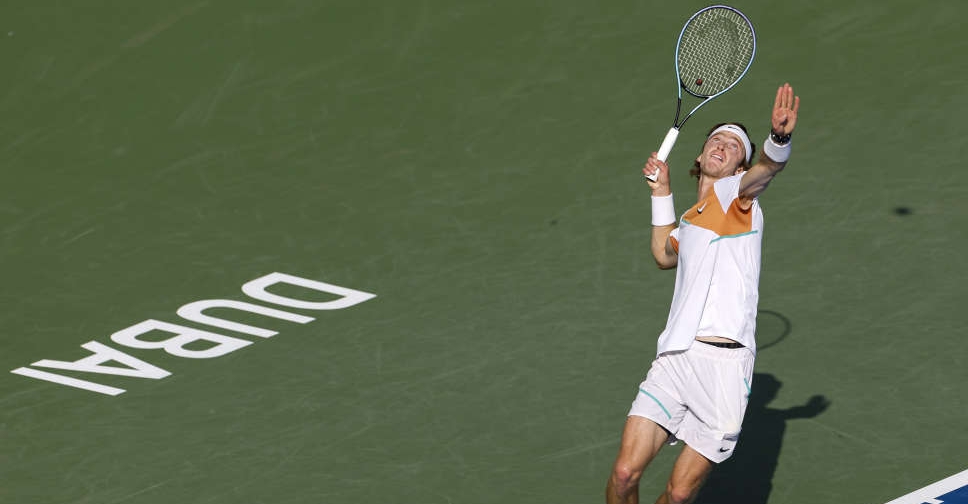 The countdown to the Dubai Duty Free Tennis Championships has ramped up after organisers confirmed an impressive men’s field that will feature a host of emerging and established names, including four Grand Slam winners.

World No.2 Rafael Nadal, injury permitting, and World No.5 Novak Djokovic remain on course to head an impressive ATP line-up boasting four of the world’s top 10 male players, from February 25 to March 4.

Reigning champion Andrey Rublev (World No.6) will return to defend his title and is joined by 2021 US Open winner Daniil Medvedev (World No.8).

The extended field features nine of the world’s top 20, including Olympic Gold medallist Alexander Zverev, World No.11 Hubert Hurkacz, 2014 US Open champion Marin Cilic, World No.15 Pablo Carreno Busta, World No.20 Karen Kachanov, a Dubai resident and quarterfinalist at the Dubai tournament in 2020.

"With seven of the top 20 men, including Novak, as well as last year’s winner Andrey Rublev and a host of others, spectators in Dubai are in for another fantastic, unmissable tournament next month," said Colm McLoughlin, Executive Vice Chairman and CEO of Dubai Duty Free.

The return of Nadal, 15 years after his last appearance at the event, was confirmed earlier this month.

However, the 22-time Grand Slam winner suffered a grade two tear in his left pelvis area during the ongoing Australian Open and tournament organisers are in touch with his team.

This week, organisers have also confirmed a women’s field that will feature the world’s top 10 and 18 of the top 20 female players from February 19-25.

"Having such impressive fields for both the WTA and ATP tournaments means spectators will witness world-class action on court once again next month. As ever, we will also have a multitude of fun activities in the Tennis Village providing fans of all ages with live entertainment, a host of competitions, and big screens broadcasting the action," said Tournament Director, Salah Tahlak.

Tickets for Championships, which runs from February 19 – March 4, are on sale online, starting from AED 55.

They will also be available every day at the Dubai Duty Free Tennis Stadium Box Office from February 9 between 9:00 am and 9:00 pm.

Tournament organisers have urged fans to secure their seats through the official platforms.

Tickets for the men’s event closed online within two hours of going on sale on January 17, however a limited number of tickets will be released this Tuesday, January 24, at 9:00 am.

A second batch will be made available at the stadium Box Office from 9:00 am on February 9.

Tickets, from both outlets, will be allocated on a first-come, first-served basis.