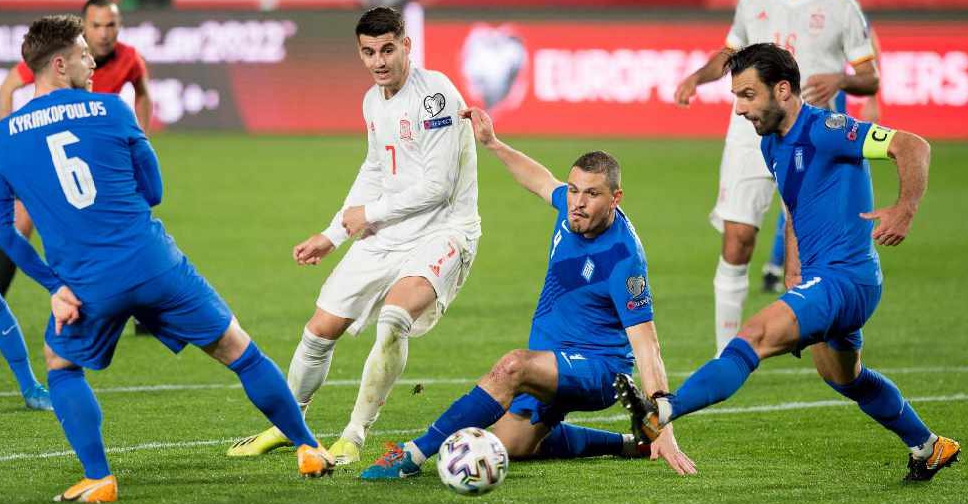 Former champions Germany, England and Italy got off to winning starts in their World Cup qualifying campaigns but Spain were held to a 1-1 home draw by Greece.

The German team followed the example of Norway on Wednesday in making a protest before the start of the game, lining up in Tee-shirts spelling out "Human Rights".

After the Norway protest, FIFA said it would not be sanctioning the team, saying it supported free speech.

The Germans took the lead after a delightful move as Joshua Kimmich found Serge Gnabry with a perfectly weighted pass and he touched it back for Goretzka to volley home in the third minute.

Havertz made it 2-0 after another defence-splitting pass from Kimmich released Leroy Sane who squared it back for the Chelsea forward to curl in a low shot.

Dominic Calvert-Lewin scored twice and Ollie Watkins marked his debut with a goal as England crushed San Marino 5-0 at Wembley.

San Marino, who have never won a competitive game, held out for 13 minutes before James Ward-Prowse opened his England account with a smart finish and Calvert-Lewin made it 2-0 with a header.

Raheem Sterling made it 3-0 just after the half-hour mark at which point it seemed England might run riot.

But San Marino's mostly part-time players dug deep with Calvert-Lewin's second goal the only addition to the score until substitute Watkins slotted in late on as England moved top of Group I.

In Parma, Roberto Mancini's Italy had a tougher task but also made a positive start with a 2-0 win over Northern Ireland in Group C.

Two goals inside the first 39 minutes from Domenico Berardi and Ciro Immobile settled Italy's nerves as they look to banish the disappointment of failing to qualify for the 2018 World Cup.

A frustrating night for Spain in Granada began promisingly when Alvaro Morata opened the scoring for the hosts after 32 minutes, moments after Dani Olmo had rattled the crossbar.

However, shortly before the hour mark, substitute Inigo Martinez - on for captain Sergio Ramos - was penalised for a rash tackle on Greek midfielder Giorgos Masouras.

Anastasios Bakasetas smashed the ball in from the spot to stun Luis Enrique's side.

Robert Lewandowski struck a thunderous 83rd-minute equaliser as Poland fought back to earn a 3-3 draw with Hungary in a pulsating Group I game in Budapest.

Hungary led 2-0 thanks to goals from Roland Sallai and Adam Szalai before a triple substitute inspired a rapid revival from Paulo Sousa's side with Krzysztof Piatek and Kamil Jozwiak making an instant impact.

Piatek connected with a low cross from Gregorz Krychowiak to beat Peter Gulacsi and moments later Hungary's defence crumbled, allowing Jozwiak to slot the ball into the net.

Hungary regained the lead through Willi Orban only for Bayern Munich forward Lewandowski to earn his side a point with a rasping drive.

Jonas Wind inspired Denmark to a 2-0 win over Israel in Tel Aviv, with his flick setting up Martin Braithwaite for a clever chip for the opener. Wind volleyed the second after the break, his third goal for his country in his fifth appearance.

Scotland twice came from behind to snatch a 2-2 draw with Austria in Group F.

A spectacular overhead kick from John McGinn five minutes from time salvaged a potentially vital point for the Scots, who like Austria last qualified for the World Cup in 1998.

The 2022 World Cup finals will be held in Qatar.