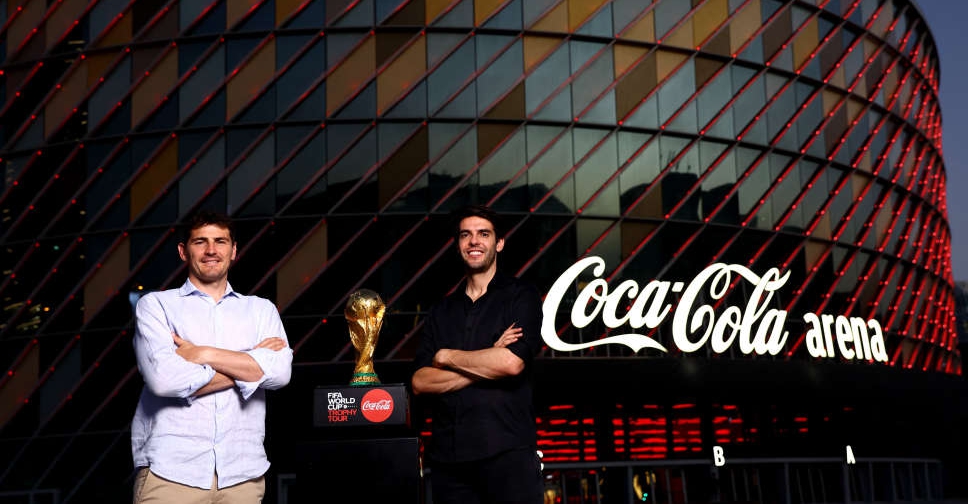 Dubai is the first stop for the original FIFA World Cup Trophy's global tour ahead of the tournament later this year.

Legendary footballers and Cup winners Iker Casillas and Kaka unveiled the trophy at the Coca-Cola Arena on Thursday.

It will stop in 51 countries and territories and for the first time ever, the tour will visit all 32 countries that qualified for the World Cup.

"As football fans around the world gear up to support their teams, Coca-Cola is thrilled to offer fans the opportunity to experience the trophy ahead of the tournament," said Brad Ross, Vice‑President of Global Sports & Entertainment Marketing and Partnerships at The Coca-Cola Company.

"The trophy tour – which will end back in Qatar, our amazing hosts – highlights our commitment to making football truly global as we realise the dreams of our fans and bring the joy and excitement of the FIFA World Cup to their doorsteps, together with our long-standing partner Coca-Cola," added Romy Gai, FIFA’s Chief Business Officer.

A magical day with Trophy Tour Ambassadors @kaka & @ikercasillas at the first stop of the @fifaworldcup #TrophyTour as we embark on a journey encompassing 51 countries including all 32 qualifiers#BelievingisMagic pic.twitter.com/a5rTUTxV7W

Made of solid gold and weighing 6.142kg, the trophy depicts two human figures holding the globe aloft. Its current design dates back to 1974.

As one of the most recognised sports symbols in the world and a priceless icon, the original FIFA World Cup Trophy can only be touched and held by a very select group of people, which includes former winners and heads of state.

Because regulations state that the original trophy must remain in FIFA’s possession and cannot be won outright, the team winning the Cup retains the authentic trophy temporarily and is then permanently awarded the tournament edition trophy, the FIFA World Cup Winner’s Trophy.

The tournament edition trophy is gold-plated, rather than solid gold, and engraved with the year, host country and winners of the respective event.