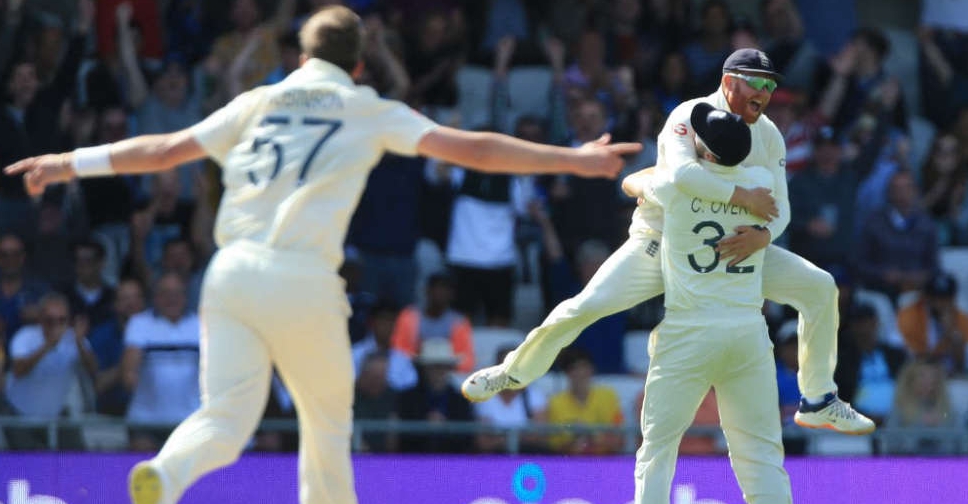 England's Jonny Bairstow leaps into the arms of Craig Overton after India's Rishabh Pant was dismissed off the bowling of England's Ollie Robinson (L) on the fourth day of the third cricket Test. Lindsey Parnaby / AFP

England's Ollie Robinson struck four times with the second new ball as the hosts thrashed India by an innings and 76 runs to level the series on day four of the third test at Headingley on Saturday.

Resuming on an overnight score of 215-2, the visitors crashed to 278 all out before lunch, with the Indian middle-order once again failing miserably against the pace and guile of the England fast bowlers.

Cheteshwar Pujara (91) was the first to be dismissed, shouldering arms to a Robinson in-swinger that was given out leg before wicket on review, before captain Virat Kohli (55) edged one to Joe Root soon after completing his half-century.

Ajinkya Rahane's dismissal for 10 off James Anderson all but ended India's hopes of overhauling the England lead, with Ravindra Jadeja's late flourish of 30 offering some entertainment but eventually being in vain.

Robinson, who was named player of the match, finished with figures of 5-65, while Craig Overton chipped in with three wickets.

Kohli put the collapse down to scoreboard pressure, saying it was a tall order to come back into the game after conceding a huge first-innings lead.

"We did well to stay in the game yesterday, fight back as much as we could, and gave ourselves a chance. But the pressure today was outstanding from the England bowlers," he said.

Opting to bat on day one, India were shot out for 78, undone by a superb spell of new-ball bowling by veteran Anderson.

In reply, England, led by skipper Root's wonderful 121 and half-centuries by Rory Burns, Haseeb Hameed and Dawid Malan, were bowled out for 432, claiming a 354-run lead.

Kohli added: "Quite bizarre (the first innings), it can happen in this country... we thought the pitch was good to bat on, coming on nicely. But the discipline forced mistakes... it's difficult to cope when you're not scoring runs."

Root praised his team for the win after they were comprehensively outplayed in the second test at Lord's.

"It was a fantastic, clinical performance... look at the talent in the dressing room, we know we're capable, just have to be more consistent. And yesterday, to hold the rate and build pressure, when it wasn't going for us -- we knew with the second new ball we always had an opportunity today."

The fourth test starts at The Oval on Thursday with the series tied 1-1.