Denmark reach Euro semis after proving too strong for Czechs 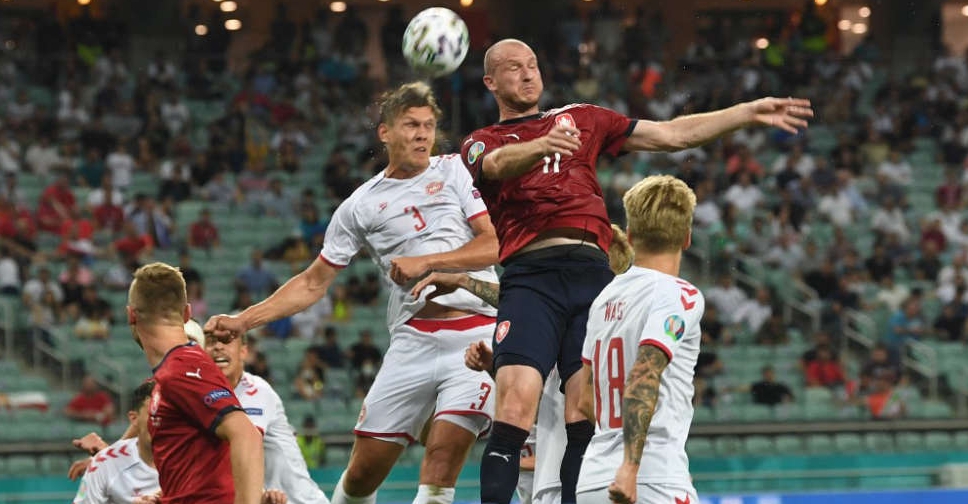 Denmark's rousing Euro 2020 campaign continued as they beat the Czech Republic 2-1 on Saturday to reach the semi-finals thanks to first-half strikes from Thomas Delaney and Kasper Dolberg.

Patrik Schick responded for the Czechs early in the second half to score his fifth goal of the tournament and become the joint-top scorer with Portugal's Cristiano Ronaldo.

However, Denmark stood firm to book their place in Wednesday's semi-final at Wembley Stadium, where they will face England who play later on Saturday.

"The Czech Republic is an insanely difficult team to play against. We played well in the first half, but the second was difficult. We can fight and fight, and we did. It was a great relief when the final whistle came."

The Czechs had pulled off a shock in the last round by beating the Netherlands 2-0 but the determined Danes proved too strong, ending their hopes of reaching a first Euros semi-final since 2004 and a first final since 1996.

"I think we did all we could. At the end we just didn't have the strength to turn it around. It looked hopeful with a quick goal but unfortunately we didn't have an answer at the end."

The result was Denmark's third straight win after hammering Russia 4-1 in their last group game and thrashing Wales 4-0 in the last 16, continuing their resurgence after losing their first games against Finland and Belgium.

It also avenged the Danes' 3-0 defeat by the Czechs in the last eight of Euro 2004 and meant they reached the semi-finals for the fourth time, taking them closer yet to adding to their unlikely triumph at Euro '92.

Denmark made a flying start when Delaney took advantage of slack marking from a corner to head home in the fifth minute, although replays showed the corner should never have been given as the ball came off a Danish player when it went out.

They struck again at the end of the first half when left back Joakim Maehle delivered an inviting cross with the outside of his right foot which Dolberg side-footed in on the volley, adding to his double in the 4-0 win over Wales.

Dolberg's goal took Denmark's goal tally at this Euros to 11, their biggest at a major tournament and surpassing the 10 they scored at the 1986 World Cup.

Denmark rode the wave of a raucous home crowd in their three group games in Copenhagen and enjoyed strong support against Wales in Amsterdam, capturing the hearts of neutrals after midfielder Christian Eriksen suffered a cardiac arrest in their opening game with Finland.

Even though there was a sizeable and noisy Danish contingent in Baku, there was a less of a festive mood than in previous games as the players were separated by an atmosphere-sapping running track and sparse crowd.

After a poor first half, the Czechs made a double change and the goal soon followed, Schick meeting a Vladimir Coufal cross first time to beat Schmeichel and match Milan Baros' five goals for the Czech Republic at Euro 2004.

But they failed to build on the momentum and Denmark woke up and defended well to secure the win and should have put the game to bed as substitute Yussuf Poulsen failed to beat Tomas Vaclik and Maehle was also denied by the keeper at point-blank range.