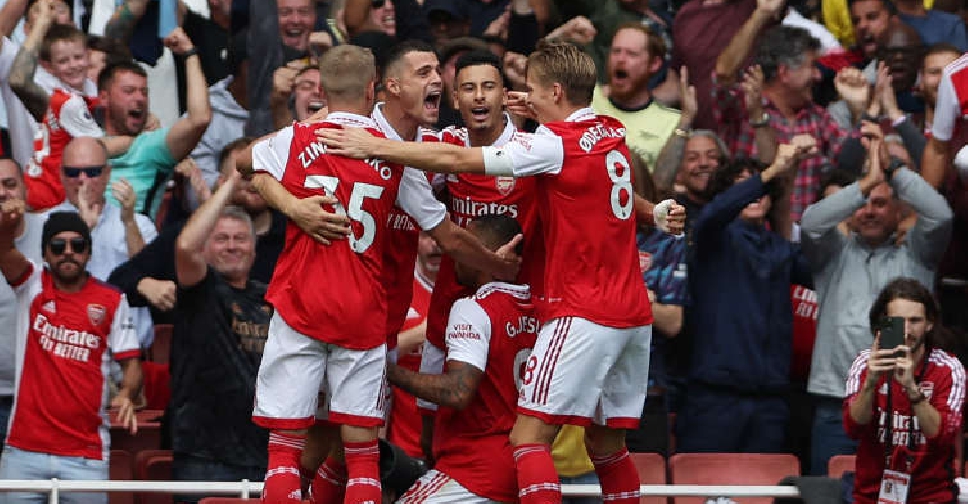 Arsenal meted out their usual punishment to north London rivals Tottenham Hotspur at the Emirates Stadium with goals by Thomas Partey, Gabriel Jesus and Granit Xhaka sealing a 3-1 win to keep them top of the Premier League on Saturday.

Harry Kane's leveller for Tottenham saw him set yet more scoring records, but his side self-destructed after halftime as their 12-year wait for a league win in the fixture continued.

An absorbing derby with the top spot up for grabs was evenly poised after Partey's sublime 20th-minute opener was cancelled out by Kane's penalty just past the half-hour mark -- making him the first player to score 100 away goals in the Premier League.

But Arsenal was gifted back the lead in the 49th minute when a dreadful mix-up between Spurs keeper Hugo Lloris and defender Cristian Romero allowed Jesus the easiest of tap-ins.

Royal was then red-carded for the visitors in the 62nd minute for a needless kick-out at Gabriel Martinelli deep in Arsenal's half, and five minutes later, Xhaka swept in Arsenal's third to leave Tottenham reeling.

There was a celebratory mood around the stadium after that as Arsenal moved to 21 points.

Previously unbeaten Tottenham could have gone top with a win but have now managed only one victory in their last 30 league visits to Arsenal. They are third with 17 points.

Tottenham will complain about the harsh decision to send off Royal, but they can have no complaints about the result as they again underperformed away at their fierce rivals.

They have lost five of their last six league matches away to Arsenal despite finishing above them for the past six seasons.

"From the first second, I think we were the better team," Xhaka said. "After we conceded, we were struggling a little bit, but in the second half, we were much better, and I am so happy to score my first derby goal and help the team to win."

We did this together, Gooners ✊ pic.twitter.com/tfVAitYy8u