What caused holes in Sue the T. rex's jawbone? 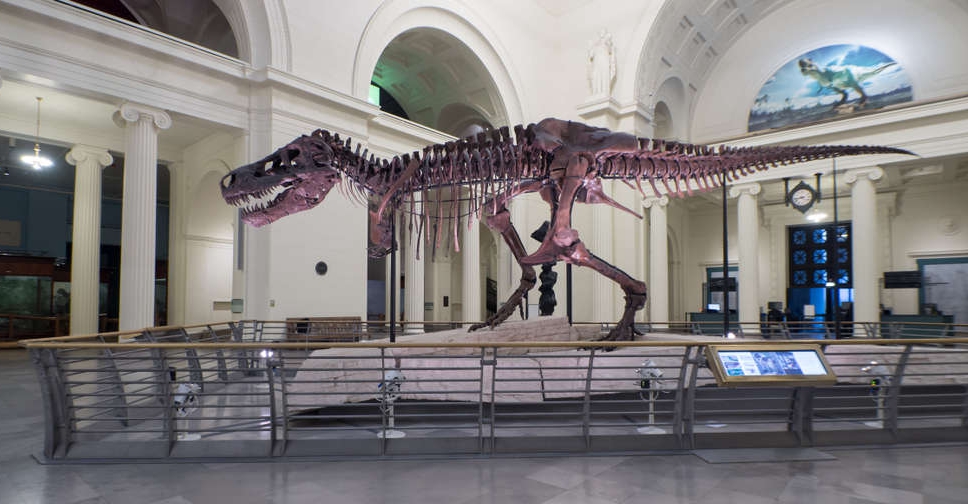 Sue, the biggest and best preserved Tyrannosaurus rex ever unearthed, no doubt was a fearsome beast when this predator prowled what is now South Dakota about 67 million years ago at the twilight of the age of dinosaurs.

But even this huge dinosaur, whose fossils are displayed at the Field Museum in Chicago, was not invulnerable. A prime example is the series of circular holes in Sue's jawbone that continue to baffle scientists.

New research seeking an explanation for these holes has managed to rule out one major hypothesis, though the answer remains elusive.

Researchers said a close examination of the eight holes - some the diameter of a golf ball - on the back half of Sue's left lower jawbone or mandible determined that a type of microbial infection did not cause them as some experts had proposed.

The holes were found to differ from bone damage caused by such an infection, said Bruce Rothschild, a medical doctor and research associate at the Carnegie Museum of Natural History in Pittsburgh, lead author of the study published this week in the journal Cretaceous Research.

Sue, measuring 40-1/2 feet long (12.3 metres), represents one of the world's best-known dinosaur fossils. Tyrannosaurus was one of the largest land predators ever, inhabiting western North America at the end of the Cretaceous Period.

Field Museum palaeontologist and study co-author Jingmai O'Connor noted that about 15 per cent of all known T. rex specimens have holes similar to Sue's.

The researchers explored whether the holes had been caused by an infection involving microbes called protozoans. One common protozoan disease known to occur in birds, which evolved from feathered dinosaurs and in people, is called trichomoniasis, caused by a parasitic protozoan. Trichomoniasis in people, though not birds, is a sexually transmitted disease.

O'Connor noted that one falcon diagnosed with trichomoniasis had shown damage in its jaw, but it differed from Sue's holes.

The bone around Sue's holes showed signs of healing, indicating that whatever caused them did not kill the animal. Similarities were observed between Sue's recovery and the healed breaks in other fossilized bones, as well as healing bone seen around holes made in the skulls of ancient Inca people in Peru.

The cause of Sue's holes remains a puzzle.

Rothschild proposed the possibility of claw damage during mating, or as he put it: "mounting from back or top with claws striking the posterior mandible." Sue has a feminine name - honouring the woman who discovered the fossils in 1990 - but the dinosaur's sex is unknown.

"I honestly have no clue what formed them," O'Connor said. "I really do not think they are bite marks or claw marks."

"A pathology that commonly affected T. rex individuals, that caused large holes to open up in the jawbone but only in the back of the jawbone, but didn't kill the T. rex because the holes started to heal, at least in Sue - it's weird," O'Connor added. "So many hypotheses have been put forth only to be shot done. It's a good palaeontology mystery - my favourite."

The holes were not the only examples of damage endured by Sue, a dinosaur that lived about 33 years.

"Sue was quite old when it died, and it shows numerous injuries and pathologies," O'Connor said. "It had gout in its hands. It had fallen on its right side, busting its ribs - they healed, though. It had torn a ligament in the right arm - healing. It had a horrible bone infection in its left leg. It had arthritis in its tail. It would not have been a happy camper the last year of its life."