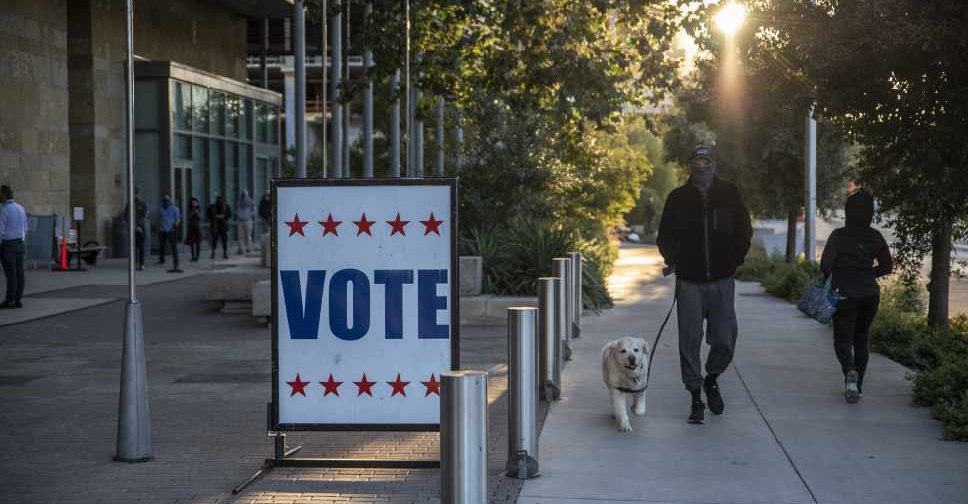 Americans by the millions flocked to the polls amid a deadly pandemic in a mostly calm show of political determination that belied tensions shaping one of the most polarizing presidential races in US history.

The masks worn by many voters and the sight of boarded-up storefronts in major city centres were reminders of two transformative issues defining the 2020 election, with COVID-19 still ravaging parts of the country after a summer of mass protests against racial injustice.

A few developments stood out during a day that was freighted with anxiety but otherwise mostly tranquil.

A Republican congressional candidate in Pennsylvania on Tuesday sued election officials in a suburban Philadelphia county, accusing them of illegally counting mail-in ballots early and giving voters who submitted defective ballots a chance to re-vote.

And a federal judge ordered the U.S. Postal Service to conduct a sweep of some facilities across the country for undelivered mail-in ballots and to ship them immediately to election offices to be counted.

But few if any major disruptions were reported at polling sites through the day as civil liberties groups and law enforcement were on high alert for any interference.

As polls were about to close for the night in Florida's closely fought Pinellas County, a last-minute rush of voters in cars pulled up to an election office in Largo minutes before 7 p.m. to deliver their vote-by-mail ballots to a drop box outside.

Foster, an African-American psychiatrist, said he liked some of President Donald Trump's policies but ultimately decided two days ago to vote for Democratic challenger Joe Biden, who he found "more forward-looking."

At a polling site in Maricopa County, Arizona, a battleground jurisdiction that includes Phoenix and its suburbs, Miguel Banuelos, 37, acknowledged defying conventional assumptions about Hispanic Americans by voting for Trump.

"Being a minority, we're expected to vote Democratic," said Banuelos, who was born in the United States and favors Trump's immigration policies. "I'm not going to be pandered to."

In New York City, some voting lines snaked around blocks, but in many places, from Los Angeles to Detroit and Atlanta, lines were short or non-existent. Poll workers surmised this was due to an unprecedented wave of early voting. More than 100 million ballots were cast before Election Day, a new record.

"I lost my absentee ballot, and I'm not going to miss this vote," said Ginnie House, 22, an actor and creative writing student who flew back to Atlanta from New York just to cast her vote for Biden.

Shivering in the cold, she was first in line among about a dozen people lined up before sunrise at a polling station set up at the Piedmont Park Conservancy.

Across the partisan divide was Linda King, 73, an education coordinator for a nonprofit, arrived early to cast her ballot for Trump at a church in Champion, Ohio, but found the parking lot jammed and decided to return in the afternoon.

"I had never seen anything like that," she recounted. King said she was determined to vote in person on Election Day out of sheer habit. "I don't celebrate Christmas in November," she said.

GLITCHES BUT NO VIOLENCE

The U.S. Justice Department's Civil Rights Division said it deployed personnel to 18 states to watch for voter intimidation and suppression. And a senior U.S. Department of Homeland Security official told reporters on a conference call there was no evidence of violence at polling stations during the day.

Business owners in cities across the country boarded up street-level windows for fear that civil unrest could erupt later, especially if the election's outcome were delayed.

While Election Day voting appeared to go smoothly in most places, there were some scattered glitches.

One of the most potentially consequential occurred in Fulton County, Georgia, at the State Farm Arena polling center in downtown Atlanta, where a burst water pipe delayed the vote count by at least two hours.

No ballots were damaged, but the snafu in the most populous county of Georgia, a toss-up state, was likely to hamper efforts to call a winner Tuesday night.

Some Americans worried about a protracted ballot count in pivotal states leaving a clear winner uncertain for days or more.

Disputing Trump's assertions that continuing to count votes after Election Day was open to abuse and somehow "dangerous," Ohio Secretary of State Frank LaRose, a Republican, told reporters on Tuesday it was normal for ballots to be tabulated days after polls closed.

Irregularities at the polls were isolated. A man legally carrying an unconcealed firearm was arrested and charged with trespassing at a polling site in Charlotte, North Carolina.

In the battleground state of Michigan, whose Democratic governor was the target of an alleged kidnapping plot, state Attorney General Dana Nessel tweeted on Tuesday about Biden and Trump demonstrators who eventually came together to take photos and sing, "God Bless America" in the city of Warren. She called it "Good Trouble."