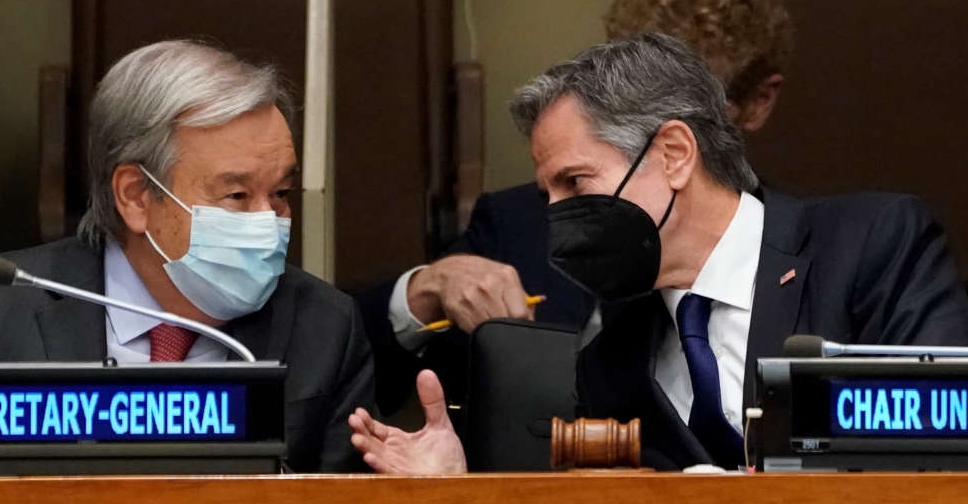 UN Secretary-General Antonio Guterres said on Wednesday that he is in "intense contact" with Russia, Ukraine, Turkey, the United States and the European Union in an effort to restore Ukrainian grain export as a global food crisis worsens.

"I am hopeful, but there is still a way to go," said Guterres, who visited Moscow and Kyiv late last month. "The complex security, economic and financial implications require goodwill on all sides."

Addressing a food security meeting at the United Nations hosted by US Secretary of State Antony Blinken, Guterres appealed to Russia to allow "the safe and secure export of grain stored in Ukrainian ports" and for Russian food and fertilizers to "have full and unrestricted access to world markets."

Russia's war in Ukraine has caused global prices for grains, cooking oils, fuel and fertilizer to soar, and Guterres warned this will worsen food, energy and economic crises in poor countries.

"It threatens to tip tens of millions of people over the edge into food insecurity, followed by malnutrition, mass hunger and famine, in a crisis that could last for years," Guterres said.

Ukraine used to export most of its goods through seaports but since Russia's Feb. 24 invasion, it has been forced to export by train or via its small Danube River ports.

UN food chief David Beasley appealed to Russian President Vladimir Putin: "If you have any heart at all, please open these ports." Beasley heads the World Food Programme, which feeds some 125 million people and buys 50% of its grain from Ukraine.

"This is not just about Ukraine. This is about the poorest of the poor who are on the brink of starvation as we speak," Beasley said.

Russia and Ukraine together account for nearly a third of global wheat supplies. Ukraine is also a major exporter of corn, barley, sunflower oil and rapeseed oil, while Russia and Belarus - which has backed Moscow in its war in Ukraine - account for more than 40% of global exports of potash, a crop nutrient.

Blinken said Russia must be compelled to create corridors so that food and other vital supplies can safely leave Ukraine by land or sea.

"There are an estimated 22 million tons of grain sitting in silos in Ukraine right now. Food that could immediately go toward helping those in need if it can simply get out of the country," Blinken said.

Blinken also said it was "false" to blame sanctions because the United States had created exceptions and was working to ensure measures imposed by Washington "are not preventing food or fertilizer from leaving Russia or anywhere else."

The United Nations has said 36 countries count on Russia and Ukraine for more than half of their wheat imports, including some of the poorest and most vulnerable in the world, including Lebanon, Syria, Yemen, Somalia and Democratic Republic of Congo.