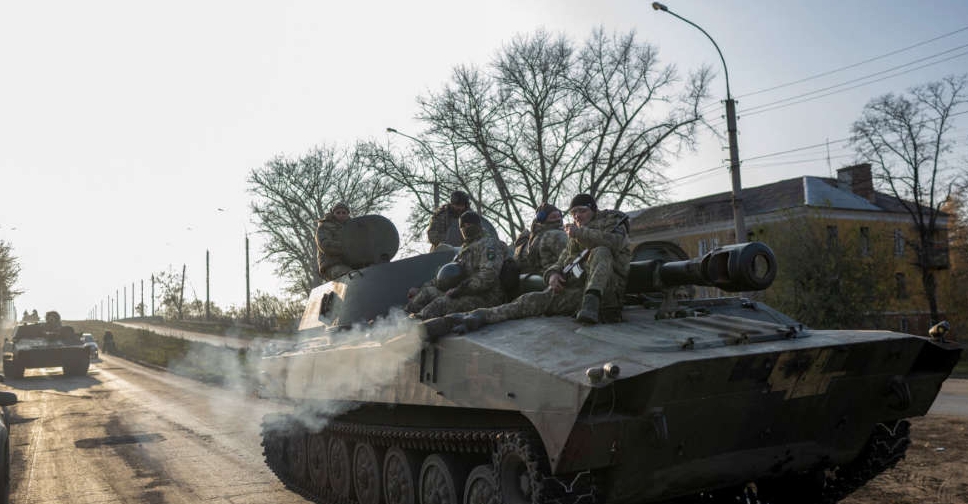 Ukrainian troops have reclaimed dozens of landmine-littered settlements abandoned by Russian forces in southern Ukraine and were advancing on Kherson on Friday, officials said, two days after Moscow said it was pulling out of the strategic city.

Ukrainian forces had liberated 41 settlements as they advanced through the south, President Volodymyr Zelenskiy said in on overnight video address, indicating one of the swiftest and most dramatic shifts of control of the nine-month war.

Ukraine's general staff said it was keeping its latest movements under wraps but listed 12 settlements it said had been freed as of Wednesday: one of them, Blagodatne, lies around 30 km from the centre of Kherson, a port at the mouth of the Dnipro river.

"Offensive actions in the specified direction continue," it said in a Friday update. "Due to the safety of the operation, the official announcement of the results will be made later."

Wrecked buildings and a destroyed truck sitting on a highway leading to Kherson marked the former front line in Posad Pokrovskiy, 12 km back up the highway. A Ukrainian flag fluttered above a bus stop pitted by bullet holes.

Homes and buildings on both sides of the road were gutted by shellfire and shattered branches hung from the trunks of trees lining the highway. Ukrainian soldiers manned checkpoints waving at passing Ukrainian military vehicles.

An overnight Russian missile attack on a residential area of Mikolaiv, 100 km to the northwest, killed six people, Ukrainian officials said on Friday, as Moscow kept up its campaign of long-range attacks on Ukraine's towns and cities.

It would take at least a week for Russia to pull out of Kherson, Ukraine's Defence Minister Oleksii Reznikov told Reuters in an interview on Thursday. He estimated Russia still had 40,000 troops in the region, and said intelligence showed its forces remained in and around the city.

If the Russian troops are indeed leaving, Moscow must now figure out how to ferry them to safety across a wide river under fire from the advancing Ukrainians.

The already damaged Antonivskiy bridge, the only road crossing from Kherson to the Russian-controlled eastern bank of the Dnipro River, collapsed, Ukraine's public broadcaster quoted local residents as saying. That could make it harder for Russian troops to flee while also stopping Ukrainian troops from following them across.

Russia announced on Wednesday it would withdraw from the west bank of the Dnipro that includes Kherson, the only regional capital Moscow has captured since invading Ukraine in February.

It is the third major Russian retreat of the war, after Moscow's forces were driven in March from the outskirts of the capital Kyiv and ousted from the northeastern region of Kharkiv in September.

Kherson province is one of four that Russian President Vladimir Putin claimed to have annexed from Ukraine in late September. The loss of the regional capital would appear to end dreams expressed by some Russians of seizing Ukraine's entire Black Sea coast, although Kremlin spokesman Dmitry Peskov said the region's annexed status remained unchanged.

US President Joe Biden welcomed news of the Russian withdrawal on Wednesday, but on Thursday played down any suggestion of a near-term resolution to the war.

"I don't think the conflict will be resolved... until Putin gets out of Ukraine," Biden told reporters at the White House.

The city of Kherson was within range of Ukrainian artillery and the closest Ukrainian reconnaissance patrols were less than 18 km from the city, Ukrainian military analyst Yuri Butusov said on the Telegram messaging app.

"Ukrainian forces are trying to break into Kherson on the shoulders of the retreating enemy," he said. "In the area of the river crossings, where Russian troops are concentrated, firefights are breaking out."

Reuters was not able to verify the extent of the Ukrainian advance.