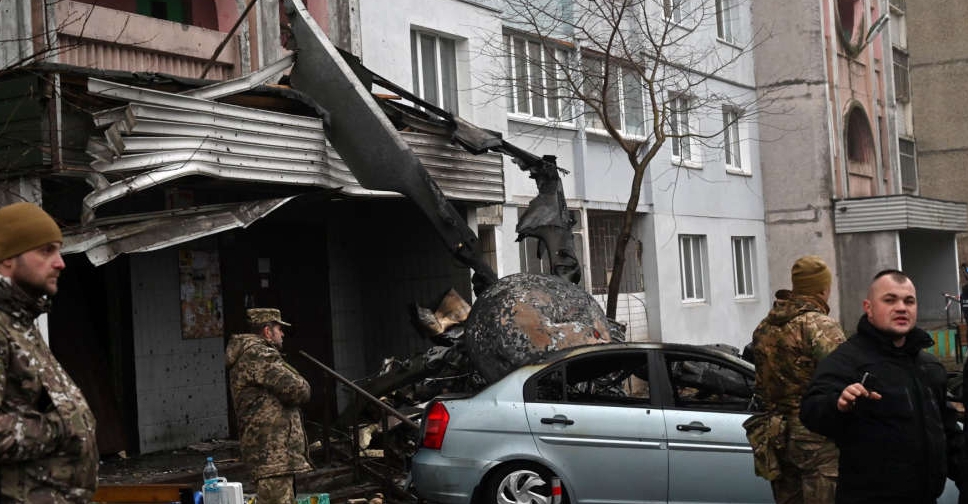 Ukraine's interior minister was among at least 16 people killed on Wednesday morning when a helicopter crashed near a nursery outside Kyiv.

Officials said nine people on board the aircraft and six on the ground, including three children, were killed when the French-made Super Puma helicopter crashed in a residential area in the suburb of Brovary on the capital's eastern outskirts.

Earlier, officials had given an initial death toll of 18.

The regional governor said 29 other people were injured, including 15 children.

"As of this minute, 3 children died. The pain is unspeakable," he said in a statement.

At the scene, debris was scattered over a muddy playground and emergency workers milled about a fleet of ambulances.

In a courtyard lay several dead bodies wearing blue interior ministry uniforms and black boots, visible from under foil blankets draped over them. A large chunk of the aircraft had landed on a car, destroying it.

"There were children and ... staff in the nursery at the time of this tragedy," Kyiv region governor Oleksiy Kuleba wrote on the Telegram messaging app.

National police chief Ihor Klymenko confirmed that Interior Minister Denys Monastyrskyi was killed alongside his first deputy, Yevheniy Yenin, and other ministry officials flying in the helicopter operated by the state emergency service.

Ukrainian officials said it was not immediately clear what had caused the helicopter to crash. There was no immediate comment from Russia, which invaded Ukraine last February, and Ukrainian officials made no reference to any Russian attack in the area at the time.

"Unfortunately, the sky does not forgive mistakes, as pilots say, but it's really too early to talk about the causes," air force spokesperson Yuriy Ihnat said, adding it could take at least several weeks to investigate the disaster.

Monastyrskyi, 42, a lawyer appointed in 2021 to run the ministry with responsibility for the police, was the most senior Ukrainian official to die since the war began.

Separately, Ukraine reported intense fighting overnight in the east of the country, where both sides have taken huge losses for little gain in intense trench warfare over the last two months.

Ukrainian forces repelled attacks in the eastern city of Bakhmut and the village of Klishchiivka just south of it, the Ukrainian military said. Russia has focused on Bakhmut in recent weeks, claiming last week to have taken the mining town of Soledar on its northern outskirts.

After significant Ukrainian gains in the second half of 2022, the frontlines have hardened over the last two months. Kyiv says it hopes new Western weapons would allow it to resume an offensive to recapture land, especially heavy tanks which would give its troops mobility and protection to push through Russian lines.

Western allies will be gathering on Friday at a US air base in Germany to pledge more weapons for Ukraine. Attention is focused in particular on Germany, which has veto power over any decision to send its Leopard tanks, which are fielded by armies across Europe and widely seen as the most suitable for Ukraine.

Berlin says a decision on the tanks will be the first item on the agenda of Boris Pistorius, its new defence minister.

Britain, which broke the Western taboo on sending main battle tanks over the weekend by promising a squadron of its Challengers, has called on Germany to approve the Leopards. Poland and Finland have already said they would be ready to send Leopards if Berlin allows it.

Germany's Chancellor Olaf Scholz was due to address the World Economic Forum in Davos, Switzerland on Wednesday, though his government is thought likely to be waiting until later in the week to unveil any decision on tanks.

Ukraine's Zelenskiy was due to address Davos by video link later on Wednesday.

Russian Foreign Minister Sergei Lavrov said on Wednesday Moscow saw no prospects of peace talks and there could be no negotiations with Zelenskiy. Russia has said talks are possible only if Ukraine recognises Moscow's claims to Ukrainian territory; Kyiv says it will fight until Russia withdraws from all of Ukraine.

In the central Ukrainian city of Dnipro, the civilian death toll from a missile that struck an apartment block on Saturday rose to 45, including six children, among them an 11-month-old boy, Zelenskiy said in his nightly video address.

Ukrainian authorities called off the search for survivors on Tuesday. Around 20 other people are still missing in the rubble after the attack, the deadliest for civilians of a three-month Russian missile bombardment campaign against cities far from the front.

Moscow denies intentionally targetting civilians. It launched what it calls its special military operation in Ukraine last year because of what it says was a security threat from Kyiv's ties with the West.

Tens of thousands of people have been killed and millions forced to flee homes in what Kyiv and the West call an unprovoked invasion to subdue Ukraine and seize its land.