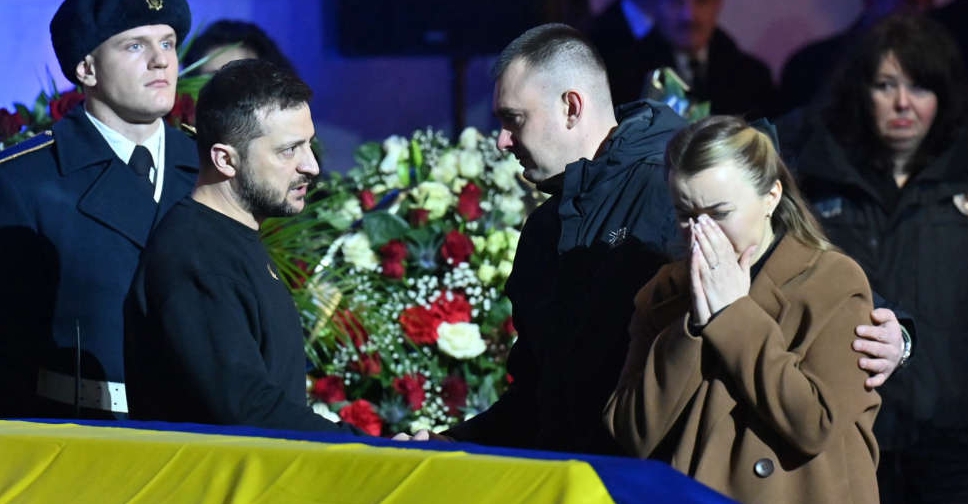 This is a fresh blow to a nation already grieving many who died in the war.

Interior Minister Denys Monastyrskyi, his deputy and five other high-ranking ministry officials were killed when their French-made Super Puma helicopter plummeted amid fog into a nursery on the eastern outskirts of Kyiv on Wednesday.

Another seven people were killed, including one child, in the crash. Officials are still investigating the cause of the crash.

The helicopter went down just days after at least 45 people were killed in a Russian missile attack that partially levelled a block of flats in the southeastern city of Dnipro.

On the battlefield, Ukrainian forces are fending off an unrelenting Russian onslaught in the east, where Moscow has expended massive resources for incremental advances 11 months into its full-scale invasion.

"The indescribable sadness is covering the soul," Zelenskiy wrote in a Telegram post on Saturday. "Ukraine is losing its best sons and daughters every day."

Zelenskiy and his wife, Olena Zelenska, paid their respects to the victims' relatives inside the hulking Ukrainian House cultural centre in central Kyiv. A crowd of mourners snaked outside toward Independence Square.

"If not for (Monastyrskyi), everything could have been completely different," he told Ukrainian media, referring to the resistance Ukraine mounted after Moscow's Feb. 24 assault.

"He is a true hero of this country."

Monastyrskyi had been flying to a location near the frontline, a police spokesperson said on Thursday.