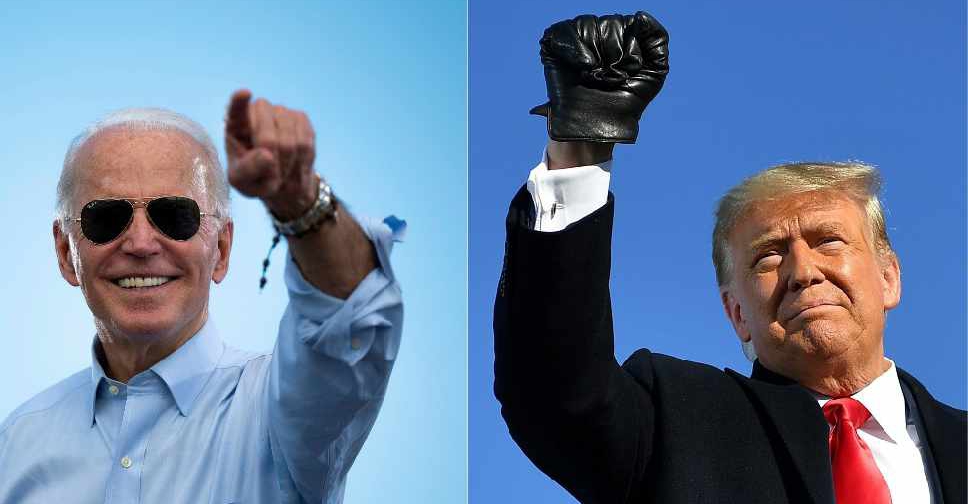 Democrat Joe Biden said he was confident of victory and incumbent Donald Trump accused Democrats of trying to steal the election on Wednesday as a tight White House race came down to a handful of states where vote-counting could take hours or days.

Trump won the battlegrounds of Florida, Ohio and Texas, dashing Biden's hopes for a decisive early defeat of the president, but Biden said he was on track to winning the White House by taking three key Rust Belt states.

Biden, 77, was eyeing the so-called "blue wall" states of Michigan, Wisconsin and Pennsylvania that sent Trump, 74, to the White House in 2016 for possible breakthroughs once those states finish counting votes cast earlier by mail and in person.

In Wisconsin and Pennsylvania and much of Michigan, mail-in ballots were not processed until Election Day on Tuesday.

"We feel good about where we are," Biden said in his home state of Delaware, shouting over a din of supporters in cars honking their horns in approval. "We believe we're on track to win this election."

Winning those three states would be enough to give Biden an Electoral College victory. Fox News projected Biden would win Arizona, another state that voted for Trump in 2016, giving him more options to get to 270 Electoral College votes.

Even without Pennsylvania, Biden victories in Arizona, Michigan and Wisconsin, along with his projected win in a congressional district in Nebraska, which apportions electoral votes by district, would put him in the White House, as long as he also holds the states that Trump lost in 2016.

"We are up BIG, but they are trying to STEAL the Election. We will never let them do it. Votes cannot be cast after the Polls are closed!" Trump said on Twitter, which swiftly tagged the tweet as possibly misleading.

Trump has repeatedly and without evidence suggested that an increase in mail-in voting will lead to an increase in fraud, although election experts say that fraud is rare and mail-in ballots are a long-standing feature of American elections.

In Pennsylvania, of the 4.5 million votes counted so far, only 750,000 were absentee votes, or just 17%. According to Edison Research, more than 2.4 million early ballots were cast in the state, of which nearly 1.6 million were by Democrats and about 555,000 by Republicans.

In Georgia, Trump was leading 52% to 48% at 1:40 a.m., but several hundred thousand ballots remained to be counted early Wednesday in Atlanta and its suburban counties. Many of those areas had favored Democrats in the past, and many of the votes remaining to be counted were those cast before the election.

Supporters of both candidates called the election a referendum on Trump and his tumultuous first term. The winner will lead a nation strained by a pandemic that has killed more than 231,000 people and left millions more jobless, racial tensions and political polarization that has only worsened during a vitriolic campaign.

Trump monitored election returns with members of his family in the living room of the White House residence. Going in and out of the room were first lady Melania Trump, his son-in-law Jared Kushner and his daughter Ivanka among others. “He’s calm, chilling,” said a source familiar with the scene.

A senior Trump aide, watching returns at the White House, described the mood there in a text: "Good. But nervous"

In the East Room of the White House, where 200 Trump supporters were having drinks and eating chicken fingers, sliders and cookies, cheers broke out when Fox News called Florida for Trump, said a source in the room.

"The place just erupted," said the source, who said the mood was both "extraordinarily positive" and "cautiously optimistic." "Everyone started cheering." Florida was a must-win state for any Trump path to victory.

Voters were also to decide which political party controls the US Congress for the next two years, with Democrats narrowly favoured to recapture a Senate majority and retain control of the House of Representatives.