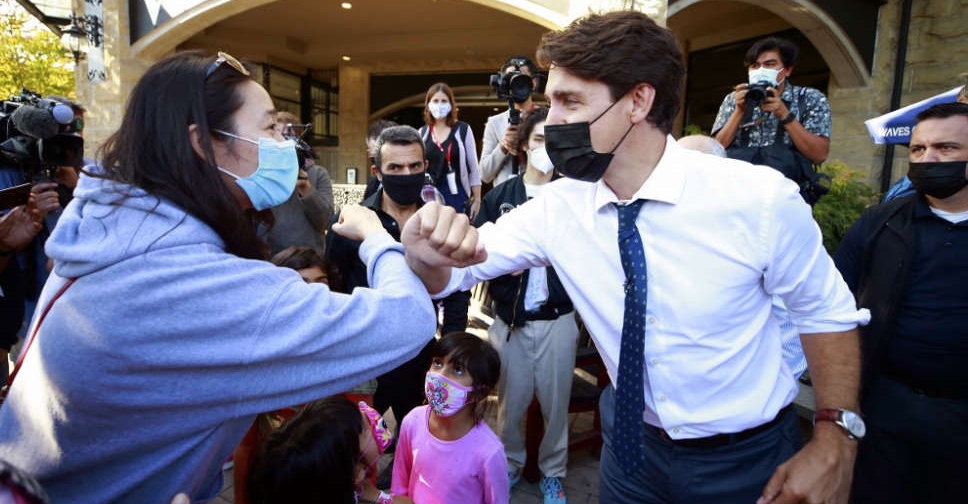 With the Canadian election in a dead heat two days before the September 20 vote, Prime Minister Justin Trudeau and his Conservative rival implored supporters to stay the course and avoid vote splitting that could hand their opponent victory.

Both men campaigned in the same seat-rich Toronto region on Saturday as they tried to fend off voter defections to the left-leaning New Democratic Party (NDP) and the populist People's Party of Canada (PPC), both of which are rising in polls.

The latest Sondage Leger poll conducted for the Journal de Montreal and the National Post newspapers put the Conservatives one percentage point ahead of Trudeau's Liberals, with 33 per cent over 32 per cent. The NDP was at 19 per cent while the PPC was at 6 per cent.

Trudeau, 49, called an early election, seeking to convert approval for his government's handling of the pandemic into a parliamentary majority. But he is now scrambling to save his job, with Canadians questioning the need for an early election amid a fourth pandemic wave.

"Despite what the NDP likes to say, the choice is between a Conservative or a Liberal government right now," Trudeau said in Aurora, Ontario. "And it does make a difference to Canadians whether we have or not a progressive government."

Trudeau has spent two of the final three days of his campaign in Ontario where polls show the NDP could gain seats, or split the progressive vote.

A tight race could result in another minority government, with the NDP, led by Jagmeet Singh, playing kingmaker. It has also put a focus on turnout, with low turnout historically favouring the Conservatives.

An Ekos poll released on Saturday also showed the main parties neck and neck though the Liberals had an edge at 30.6 per cent compared to 27.7 per cent for the Conservatives. At these levels, neither party appears likely to reach the 170 seats needed for a majority in the 338-seat House of Commons.

With a Liberal minority the most likely result based on polls, Trudeau was asked if this could be his last election. He responded: "There is lots of work still to do, and I'm nowhere near done yet."

If voters give Trudeau, who was first elected in 2015, a third term, everything they dislike about him "will only get worse," Conservative leader Erin O’Toole told supporters on Saturday, saying his party was the only option for anyone dissatisfied with the Liberals, in a dig at the PPC.

The PPC, which has channelled anger against mandatory vaccines into surprising support, could draw votes away from the Conservatives in close district races, helping the Liberals eke out a win.

An election that had appeared set to be an easy win for Trudeau, whose Liberals had led comfortably in polls before it was called, has become an unexpected slog due to a lackluster campaign, the reemergence of old scandals, and public anger over its timing.

"I wish it wasn't happening, to be honest," said Connie Riordan, a voter in Cambridge, Ontario, who said she had switched to the Conservatives in advance voting from the Liberals.

On Saturday, the Liberals announced they would drop a candidate over a 2019 sexual assault charge that the party said was not disclosed to them. The candidate, a naval reservist running in an open Liberal seat in downtown Toronto, will not be a member of the Liberal caucus, if he is elected, the party said.

O'Toole, 48, campaigned in Saini's district on Saturday, one of three Liberal ridings he is hoping to swing his way. Earlier, he appeared in a Conservative-held riding west of Toronto that was closely fought during the 2019 election.

The area’s member of Parliament, who is not running again, came under fire last spring for saying COVID-19 lockdowns were the "single greatest breach of our civil liberties since the internment camps during WW2".

O'Toole, who said he wants to get 90 per cent of Canadians vaccinated, has refused to say who among Conservative Party candidates were.