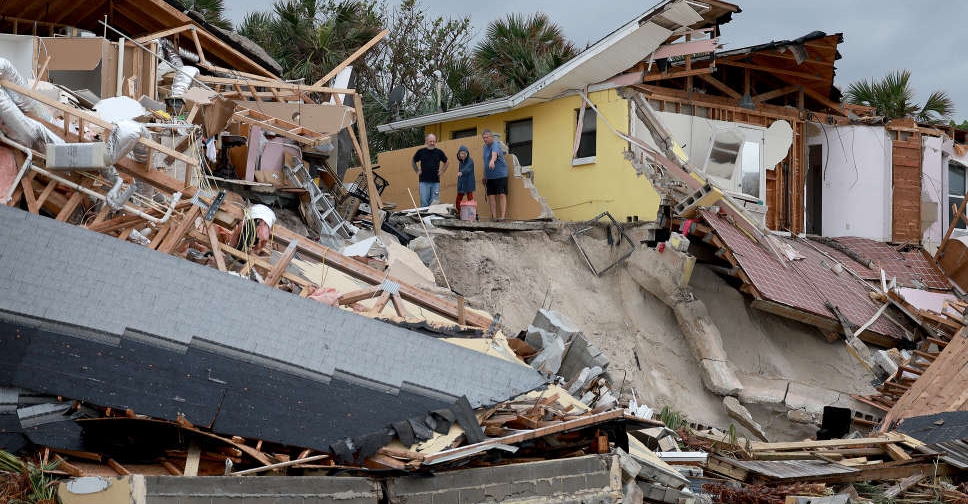 As many as 350,000 homes and businesses across Florida were without power on Thursday after the storm struck the Atlantic Coast near Vero Beach, north of Miami, at 3 a.m. EST (0800 GMT), as a late-season hurricane packing sustained winds of 75 miles per hour (120 km per hour).

The year's eighth Atlantic hurricane and its 14th named cyclone system, Nicole was downgraded to a tropical storm soon after moving inland.

"We're ready and resources are available for the post-storm needs," Florida Governor Ron DeSantis said at a press conference. "This is still a large storm and it is impacting much of the state. Winds are the main concern with Nicole."

Several beachfront homes collapsed in the upscale community of Wilbur-by-the-Sea, just south of Daytona Beach, and several more were left teetering on the brink after surging waves of surf kicked up by high winds undercut the buildings' foundations.

The homes had already been vacated and no one was injured, Volusia County Sheriff Mike Chitwood said.

About 150 residents from two shoreside condominium complexes had been evacuated on Wednesday because the buildings were in danger of collapse from crumbling seawalls, Chitwood said.

In Vero Beach, the Indian River County seat closer to where the storm's center made landfall, much of the town's boardwalk was washed out by pounding waves cresting 25-30 feet high.

Volusia and Indian River counties were among several east coast areas hard hit six weeks ago by Hurricane Ian, a catastrophic Category 4 storm that initially struck Florida's Gulf Coast, then swept across the state to the Atlantic, causing some $60 billion in damage and killing more than 140 people.

Kevin Guthrie, Florida's emergency management director, cautioned residents on Thursday to remain indoors, even if the eye of Nicole had passed.

"There are heavy winds and a potential for tornadoes," he said.