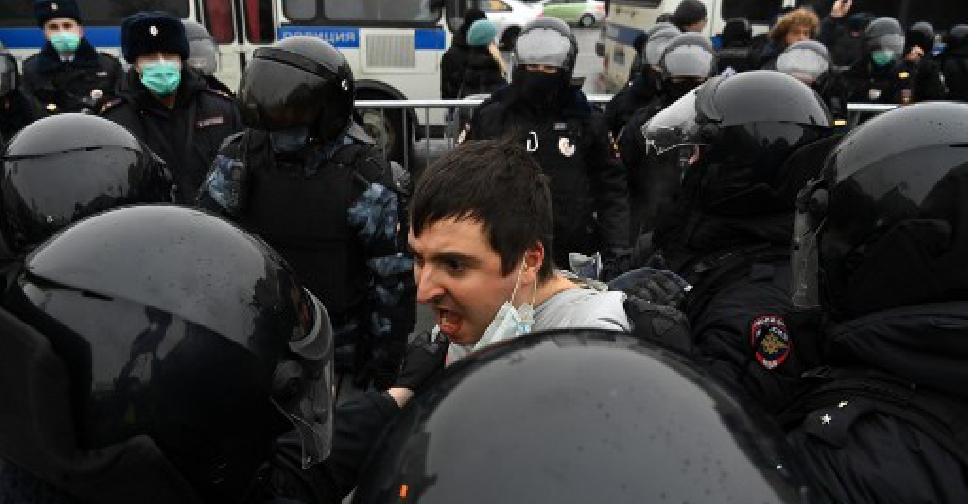 Police detained more than 200 people in Russia's Far East and Siberia on Saturday as protesters defying bitter cold and a ban by authorities staged nationwide rallies to demand the release of jailed Kremlin critic Alexei Navalny.

Navalny called on his supporters to protest after being arrested last weekend when he returned to Moscow for the first time since being poisoned in August with a military-grade nerve agent. Navalny had been treated in Germany.

Video footage from Vladivostok showed riot police chasing a group of protesters down the street, while demonstrators in Khabarovsk, braving temperatures of around -14 Celsius (7 degrees Fahrenheit), chanted "Shame!" and "Bandits!"

Police in the Siberian city of Yakutsk, one of the coldest cities in the world and where the temperature was -52 Celsius on Saturday, grabbed a protester by his arms and legs and dragged him into a van, video footage from the scene showed.

The OVD-Info monitoring group said that 238 people, including 56 in Novosibirsk, had been detained so far at the rallies.

In Moscow, police put up barricades around Pushkinskaya Square as workers were engaged in re-tiling it, an apparent attempt to thwart a demonstration that was scheduled to start at 1100 GMT. Police also detained a few people gathered on the square before the rally, including a lone picketer.

Navalny, an ex-lawyer who has accused President Vladimir Putin of ordering his murder, could face years in jail over legal cases that he calls trumped up. Putin has denied involvement.

Navalny's supporters are hoping they can produce a show of anti-Kremlin street support despite winter conditions and the coronavirus pandemic to pressure the authorities into freeing him.

In a push to galvanise support ahead of the protests, Navalny's team released a video about an opulent palace on the Black Sea they alleged belonged to Putin, something the Kremlin denied. As of Saturday the clip had been viewed more than 65 million times.