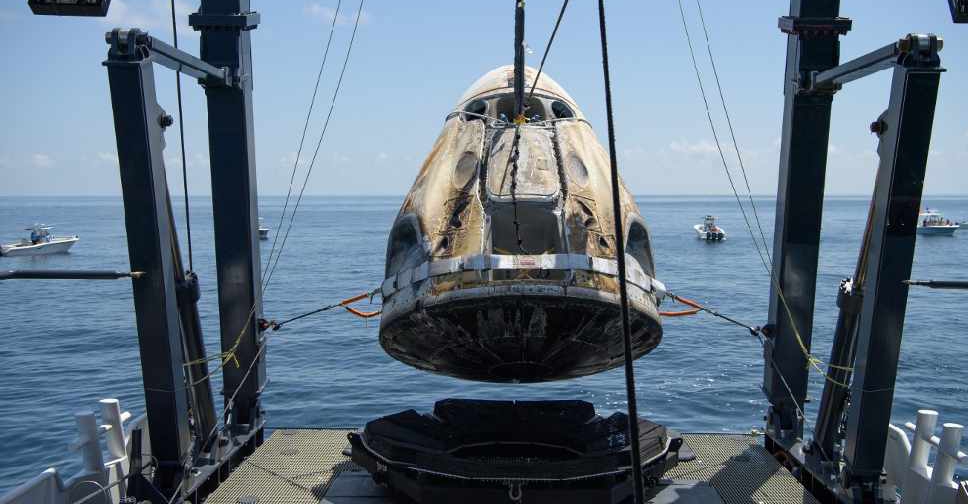 US astronauts Bob Behnken and Doug Hurley, who flew to the International Space Station in SpaceX's new Crew Dragon, splashed down in the Gulf of Mexico on Sunday.

Behnken and Hurley, tallying 64 days in space, undocked from the station on Saturday and returned home to land their capsule in calm waters off Florida's Pensacola coast on schedule at 2:48 pm ET following a 21-hour overnight journey aboard Crew Dragon "Endeavor".

"This has been quite an odyssey," Hurley said at a homecoming ceremony at NASA's Johnson Space Center in Houston. "To be where we are now, the first crewed flight of Dragon, is just unbelievable."

The successful splash-down, the first of its kind by NASA in 45 years, was a final test of whether SpaceX Chief Executive Elon Musk's spacecraft can transport astronauts to and from orbit — a feat no private company has accomplished before.

"This day heralds a new age of space exploration," Musk said. "I'm not very religious, but I prayed for this one."

NASA administrator Jim Bridenstine said the successful mission marked "a new era of human spaceflight where NASA is no longer the purchaser, owner and operator of all the hardware" but one of many future customers of space travel.

"Today we really made history."

For the return sequence, on-board thrusters and two sets of parachutes worked autonomously to slow the acorn-shaped capsule, bringing Behnken and Hurley's speed of 17,500 miles per hour in orbit down to 350 mph upon atmospheric re-entry, and eventually 15 mph at splash-down.

The crew's retrieval from Crew Dragon was delayed slightly as the teams worked to flush its fuel tanks after sensing traces of nitrogen tetroxide fumes outside the capsule.

Hurley, giving a thumbsup as he was wheeled out of the spacecraft on a stretcher, a normal procedure as astronauts adjust to Earth's gravity, said, "I'm just proud to be a small part of this whole effort to get a company and people to and from the space station."

"Thanks for doing the most difficult parts and the most important parts of human spaceflight - getting us into orbit and bringing us home," Behnken told SpaceX mission control in Hawthorne, as the hatch door was opened.