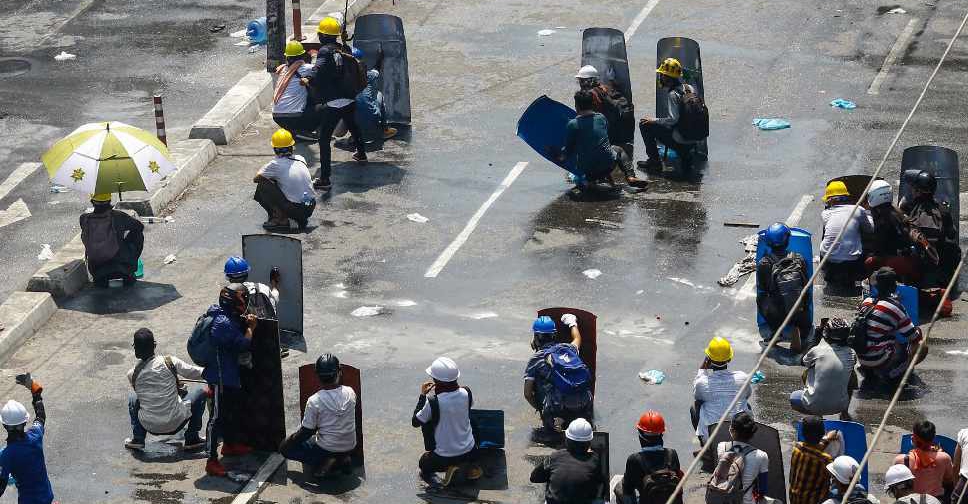 Myanmar's ousted leader Aung San Suu Kyi appeared at a court hearing via video conferencing on Monday, the first time her lawyers had seen her since she was detained in the February 1 military coup.

Supporters, meanwhile, marched in several towns and cities in defiance of a crackdown after the bloodiest day so far in the aftermath of the coup, with security forces killing at least 18 people in protests on Sunday.

Suu Kyi, aged 75, looked in good health during her appearance before a court in the capital Naypyidaw, one of her lawyers said. Two more charges were added to those filed against her after the coup, he said.

"I saw A May on the video, she looks healthy," lawyer Min Min Soe told Reuters, using an affectionate term meaning "mother" to refer to Suu Kyi.

"She asked to meet her lawyer."

The Nobel Peace laureate, who leads the National League for Democracy (NLD), has not been seen in public since her government was ousted and she was detained along with other party leaders.

She was initially charged with illegally importing six walkie-talkie radios. Later, a charge of violating a natural disaster law by breaching coronavirus protocols was added.

On Monday, two more charges were added, one under a section of a colonial-era penal code prohibiting publication of information that may "cause fear or alarm", and the other under a telecommunications law stipulating licences for equipment, the lawyer said.

The next hearing will be on March 15. Critics of the coup say the charges were trumped up.

Myanmar has been in chaos since the military seized power after alleging fraud in a November election won by the NLD in a landslide, with daily protests getting increasingly violent as police and troops try to stamp them out.

Police in the main city of Yangon used stun grenades and tear gas to disperse hundreds of protesters on Monday, witnesses said.

There were no immediate reports of any casualties but the previous day, police opened fire on crowds in various parts of the country killing 18 people, the United Nations human rights office said.

"We have to continue the protest no matter what," Thar Nge said by telephone after police firing tear gas forced him and others to abandon a barricade in a Yangon street.

The military has not commented on Sunday's violence and police and military spokesmen did not answer calls.

Demonstrators marched in the northwestern town of Kale holding up pictures of Suu Kyi and chanting "democracy, our cause, our cause".

Live video on Facebook showed a small crowd in hard hats gathered across a street in the northeastern town of Lashio, chanting slogans as police marched towards them. Protesters also marched in the central town of Bagan.