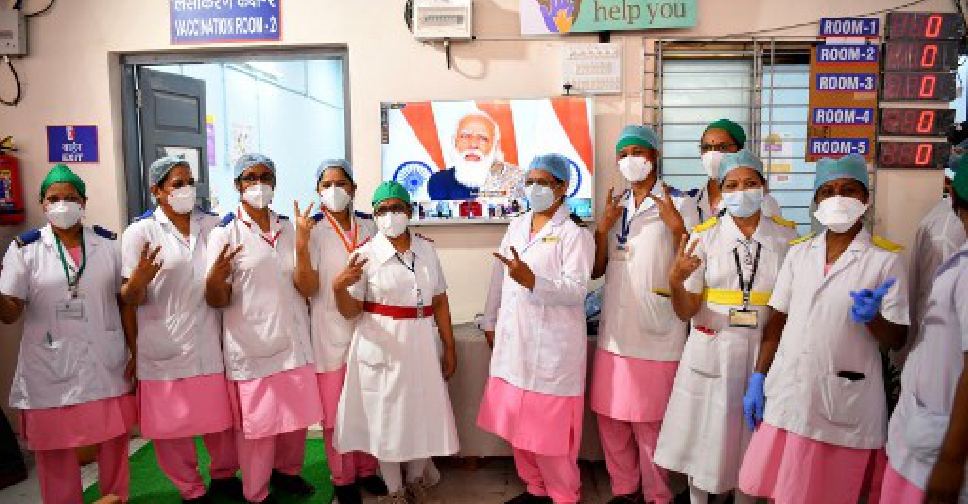 Modi addressed the healthcare workers through video conferencing but will not immediately take the vaccine himself as India is initially prioritising nurses, doctors and others on the front line.

On the first day, around 100 people will be voluntarily vaccinated in each of the 3,006 centres in the country, the government said this week, calling it the start of the biggest such campaign in the world.

“This will be the world’s largest vaccination programme covering the entire length and breadth of the country,” Modi’s office said in a statement this week.

India, the world’s most populous country after China, has said it may not need to vaccinate all of its 1.35 billion people to create herd immunity. Still, covering even half its population will make it one of the largest immunisation programmes in the world, even if countries like the United States were to vaccinate every resident.

Beneficiaries, however, will not be able to choose between the Oxford University/AstraZeneca vaccine and a government-backed, homegrown one from Bharat Biotech whose efficacy is not known. Both are being produced locally.

India, which has reported the highest number of coronavirus infections after the United States, wants to vaccinate around 300 million people with two doses in the first six to eight months of the year.

Some 10.5 million people in India have been infected with the coronavirus, more than 151,000 of whom have died, though the rate of cases has come down since a mid-September peak.

First to get the vaccine will be 30 million health and other frontline workers, such as those in sanitation and security, followed by about 270 million people older than 50 or deemed high-risk because of pre-existing medical conditions.

Modi, 70, has said politicians will not be considered frontline workers.

On Saturday, he is also expected to formally inaugurate the government’s online platform Co-WIN that will provide information on vaccine stocks, storage temperature and keep track of beneficiaries.

The government has already bought 11 million doses of the AstraZeneca COVISHIELD shot, produced by the Serum Institute of India, and 5.5 million of Bharat Biotech’s COVAXIN.

COVISHIELD is 72 per cent effective, according to the Indian drug regulator, while Bharat Biotech says COVAXIN’s last-stage trial results are expected by March.