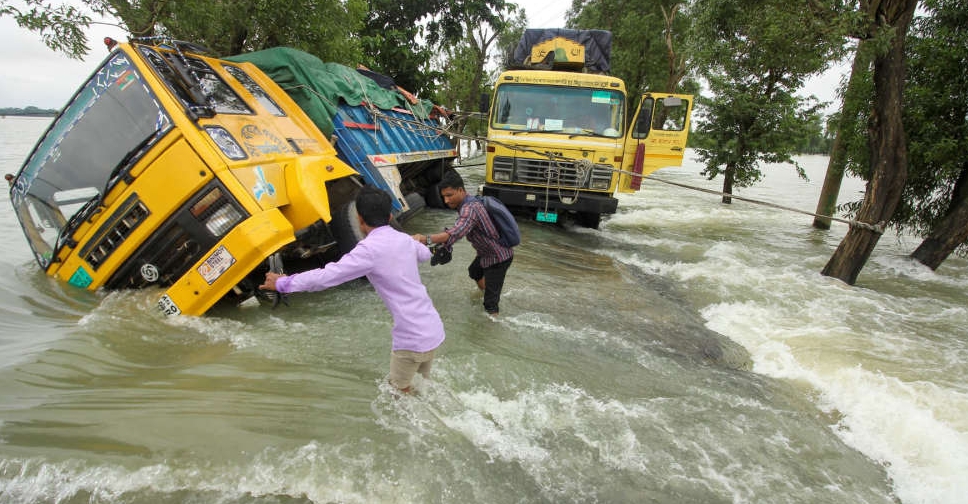 Floodwaters inundated more of Bangladesh and northeast India on Tuesday, officials said, as authorities struggled to reach more than 9.5 million people stranded with little food and drinking water after days of intense rain.

Particularly heavy monsoon rain has brought the worst floods in more than a century in some parts of low-lying Bangladesh and have killed at least 69 people over the past two weeks there and in northeast India's Assam state.

"People are without food. They are not even getting drinking water since floodwater submerged all tube-wells," Abu Bakar, 26, a resident of hard-hit Sunamganj district in northeastern Bangladesh, told Reuters by telephone.

Prime Minister Sheikh Hasina flew over some of the flood-hit areas on Tuesday, looking down on huge tracts covered by brown water, broken up by occasional outcrop of land, television footage showed.

The monsoon brings heavy rains to South Asia between June and October, often triggering floods, especially in low-lying areas like Bangladesh, where rivers swollen with waters pouring out of the Himalayas often burst their banks.

Extreme weather in South Asia has become more frequent in and environmentalists warn that climate change could lead to ever more serious disasters.

Atiqul Haque, director general of Bangladesh's Department of Disaster Management, said three more districts in northern and central parts of the country had been flooded.

"The local administration along with army, navy, police, fire and emergency services personnel and volunteers have been engaged in rescue and relief operations," Haque said.

The floods in the Sylhet region, which includes Sunamganj, are the most severe in more than a century and the U.N. children's fund said 90% of its health facilities have been inundated, and cases of waterborne diseases are increasing.

UNICEF said it was urgently seeking $2.5 million to respond to the emergency in Bangladesh and it was working with the government to supply water purification tablets, emergency medical supplies and water containers.

"Four million people, including 1.6 million children, stranded by flash floods in northeastern Bangladesh are in urgent need of help," UNICEF said in a statement.

In some areas, the Bangladesh military dropped sacks of relief supplies from helicopters to people waiting on rooftops, television footage showed.

"Many people are still without food and water," he said.

"Cries for help are getting louder."

In Assam state in neighbouring India, flooding has cut off three districts in the Barak valley and the water in parts of the region's main city of Silchar is waist-deep, authorities and residents said.

"We will try to airlift fuel to Silchar and the other two districts immediately."

Indian army and paramilitary troops have been called in to help with rescue operations and had evacuated about 1,000 people in the past 72 hours, an official said.

Assam and neighbouring Meghalaya state have received 134% more rainfall than the average at this time of the year, according to data from the state-run India Meteorological Department.

About 4.7 million people have been forced from their homes in Assam, with some 330,000 staying in shelters, the government said.

"I am 80 years old and have never witnessed such devastation in my life," said Majaharul Laskar, a retired government official in Silchar.